It’s no secret that child stars are prone to mental breakdowns and drug addictions as they grow up in Hollywood. Take Mean Girls star Lindsay Lohan, for example, who just got out of rehab for the 6th time and has become the poster girl for “child stars gone wrong.” Or Amanda Bynes, the adorable Nickelodeon funny girl who publicly had a mental breakdown on Twitter and found herself hospitalized and diagnosed with schizophrenia. While the fame and fortune that comes along with being a celebrity seems glamorous (and most certainly can be at times) it’s extremely taxing for a kid who suddenly has to give up his or her childhood to work full-time hours in the “biz” and deal with the pressures of maintaining an image in front of millions of fans. The effects of fame can be detrimental to anyone’s health, let alone a child who has been in the public eye practically since birth.

Take Drew Barrymore, for example. It’s as if she were destined to be an actress; born on February 22, 1975, she is the daughter of John Drew Barrymore Jr. and Ildiko Jaid, granddaughter of John Barrymore and Dolores Costello, and great-granddaughter of Maurice Barrymore and Georgiana Drew, all of whom were actors. Famous director Steven Spielberg is even Barrymore’s godfather. You can say that acting flows through the star’s veins. Barrymore made her big screen debut at the age of 4 in Ken Russell’s Altered States (1980), but landed one of her most famous roles at the age of 7 as Gertie in E.T.: The Extraterrestrial (1982). The role made the young actress an instant child star. Following completion of the movie, she appeared on NBC’s The Tonight Show with Johnny Carson and became the youngest host of Saturday Night Live. “From the time I became famous in E.T., my life got really weird,” Barrymore wrote in a letter to People Magazine in 1989. “One day I was a little girl, and the next day I was being mobbed by people who wanted me to sign my autograph or pose for pictures or who just wanted to touch me. It was frightening. I was this 7-year-old who was expected to be going on a mature 29.” Being thrust into the spotlight at such a young age changed her life completely. Her mother started bringing her to nightclubs when she was just 8 years old; she took up smoking and drinking by 9, marijuana at 10, and began snorting cocaine at 12. Little Drew had grown up to be a wild child living in Hollywood, but when she was 13, her antics had escalated too far and she was placed in a rehabilitation center. She continued to make headlines for her controversial behavior in the ’90s, such as posing nude for Playboy and flashing David Letterman on live TV. Fortunately, Barrymore’s luck began to change in 1995, when she founded her own production company, Flower Films. She eventually rose above her wild-child reputation and is credited today with being a talented actress.

There are many reasons why child stars go off the deep end. Former child star Mara Wilson explains why famous kids lose control in a Cracked.com article from “an insider’s perspective.” Wilson gained early fame when she was 5 years old and cast in the 1993 film, Mrs. Doubtfire, and went on to act in Miracle on 34th Street (1994) and Matilda (1998), among others. Wilson eventually left Hollywood at the age of 13 before the pressures of Hollywood could affect her and is now focusing on a writing career. In her article, “7 Reasons Child Stars Go Crazy (An Insider’s Perspective),” she writes that parents are a big reason why young celebrities become unhinged. “Kids whose parents pushed them into acting often grow up to resent them,” says Wilson. A lot of the time kids are forced into acting by their parents for monetary gain and feel angry or betrayed when they catch on to the fact that they were just being used. Parents of famous children may also lose control of their behavior, especially once the child begins making more money than the parents. Wilson cites Billy Ray Cyrus, who said in 2010 that he had very little control of his daughter, Miley Cyrus, anymore and that her “Disney entourage had long since taken over.”

Child stars are kids, and like all kids, they need to rebel, but they can’t. When normal kids rebel, they only have to answer to their parents, guardians, or teachers. When a child star rebels, not only is their job on the line, but they are quickly judged by millions of fans and are reprimanded on a large scale for not being a positive role model. Child stars subsequently become resentful and act out. When they become older and gain more freedom, Wilson writes that they “have money and little to no experience making decisions for themselves, so their rebellions are going to be on a much larger scale.”

A big reason why child stars break down is because they get used to all the attention that comes with fame, and then suddenly lose it when they grow up. Being famous often inflates one’s ego, and children are no exception. They are complimented all the time and given gifts, and fans write to them and shout when they see them. Child stars live in a fantasy world where everything revolves around them, but once they hit puberty, the chances that they will remain in the business are slim. Child stars are loved because they are young and cute, but as they grow and their bodies change, they lose the adorable charm that once captivated the world and are quickly replaced and forgotten. When fame is taken away from child stars so quickly, they may not know how to handle the lack of attention and look to drugs and/or alcohol to cope.

But not all child stars lose control of their lives. Natalie Portman started out as a child actor and went on to graduate from Harvard and win an Oscar for her role in Black Swan in 2010. Dakota Fanning is currently studying at New York University, and Miranda Cosgrove took a break from acting to study at the University of California. “If the parents are able to keep every other aspect of the child’s life controlled and normal and there are continued boundaries and rules, those are the kids that do well,” says psychologist Ginger Clark, an associate professor of clinical education at the University of Southern California. “If you don’t have a really stable parental unit that’s setting limits ahead of time, then the roles get flipped easily and the child becomes the parent. They’re not ready for the responsibility. And you see kids spin out a little bit.” Experts say the key to a healthy career and stable personal life for a child star is to be surrounded by positive influences. It’s important for parents to teach their children to not let greed or an inflated sense of self affect their choices in life. 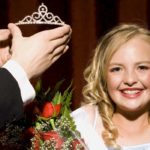 Are Pageant Moms Taking It Too Far?