Infants who later developed autism spectrum disorder (ASD) were found to observe objects more closely and more frequently than infants who did not develop ASD, according to a recent study. This behavior was found to manifest by as early as 9 months of age.

Repetitive behavior is a core diagnostic component for ASD. The researchers in the study published in the Journal of Abnormal Psychology investigated whether this type of behavior manifests before a child’s first birthday.

The prospective longitudinal study involved infant siblings of children with ASD or without ASD. The infants were evaluated at 9, 12, 15, 18, 24, and 36 months of age. Of the 185 enrolled infants, 156 completed the final outcome assessment at 36 months. The final analyzed sample included 147 infants. Trained raters examined the infants for prolonged object exploration and social responsiveness.

Other types of relevant repetitive behaviors were not evaluated, representing a possible limitation of this study. The researchers also report the possibility of missing data and note the study’s small sample size.

“Overall, we found that unusual visual inspection of objects is present in ASD earlier than previously thought and is, to our knowledge, one of the earliest behavioral predictors of ASD outcome yet documented,” the researchers report. “Our findings suggest that close monitoring of unusual visual inspection of objects by 9 months of age may be an important aspect of early detection efforts and may be valuable to integrate into early screening and diagnostic tools.” 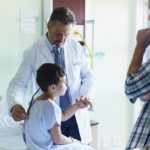