The study recruited 131,434 participants from the Korean National Health Insurance Service database who presented between 2005 and 2013. All participants were older than 18 years and had newly registered vision impairments. A control group was selected using 1:1 propensity score matching with similar age, sex, residential area, and income. Researchers followed each participant in the 5 years following VI registration and during the 3 years prior to registration. Using conditional logistic regression modeling, they examined the risk of depression before and after a person registers with a VI.

The “time to registration” was defined in the study using the South Korean qualifications of having persistent visual disability after treatment for longer than 6 months after the causative disease, injury, or undergoing surgery.

This study reports that rates of depression are especially high in men compared with women ((OR, 2.406, 95% CI 2.145 to 2.699 vs OR, 1.626, 95% CI 1.475 to 1.793). They also suggest that VI can lead to higher rates of unemployment and social isolation, which can increase risk of depression. To combat this, researchers recommend physicians offer psychiatric interventions within these populations when diagnosing VI.

Limitations in this study include the use of health codes rather than medical records to diagnose depression, the reliance on registration of VI disability which may not account for all people with VI, a lack of analysis of other possible factors influencing depression, and finally, the severity of VI was only documented at the time of registration, meaning that any changes to severity were not recorded in the five years following registration. 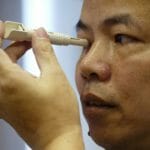