Have patients inquired whether there are monsters eating away at their eyes? They may have if they recently traveled outside of the US. Parasitic eye infections are relatively uncommon in the US, but they are a significant cause of eye problems throughout the world. Americans who travel abroad to lands where eye parasites are common are at high risk for developing “monsters” in their eyes.

Common in warm, moist areas like South America and the Caribbean, Toxoplasma gondii infects about one-third of all humans. Surprisingly, infection with these protozoa is also common in Europe, especially France, where infection rates may be as high as 90%. According to the CDC, as many as 60 million Americans are infected with this parasite.

There are 2 forms of toxoplasmosis protozoa. One lives primarily in raw or undercooked meat, while the other lives in cat feces. Pregnant women can infect their unborn babies with toxoplasmosis after changing cat litter.

Most people will not develop an eye disease as the result of infection, but those who do might experience eye symptoms, such as blurred vision, reduced vision, redness of the eye, and occasionally tearing. Eye pain may occur, especially when exposed to bright light. Infants infected in the womb will not likely have eye problems until later in life, although this early exposure to toxoplasmosis may cause serious eye or brain damage at birth.

Also known as American trypanosomiasis, Chagas disease results from infection by Trypanosoma cruzi. This parasite may be responsible for up to 10% of all deaths in Central and South America. The “kissing bug” reduviidae (which includes assassin bugs, ambush bugs, and thread-legged bugs) transmits this parasite by biting humans. These bugs can be found in the southern United States, Mexico, Central America, and South America. Fortunately, the CDC says the chances of developing Chagas disease in the US are relatively low, even if you have been bitten by an infected bug. Romaña’s sign (profuse swelling around one eye) is the hallmark of Chagas disease. The swelling is the result of bug feces being rubbed into the eye.

Loiasis is also known as the African eye worm and is caused by the Loa loa worm. The adult worm wanders through the human body via subcutaneous tissue. It does not usually become noticeable until it crosses the conjunctiva. There, it creeps along just under the surface of the eye. Loa loa is native to Western Africa, particularly in rainforests in Sudan and the Congo. Mango flies transmit the worms through bites.

Cysticercosis is a tissue infection caused by the pork tapeworm Taenia solium. It is transmitted by swallowing eggs from the feces of an infected person. Eating undercooked pork does not lead to infection but can result in a tapeworm if the pork contains larval cysts. The highest rates of infection occur in Latin America, Asia, and Africa, in areas with poor sanitation and free-ranging pigs, and the infection rarely occurs in the US. Larval cysts of this tapeworm can cause swelling of the eye or even retinal detachment.

The human botfly is a big, hairy fly that resembles a bumblebee and resides in Central and South America. Whereas the adult fly does not cause problems, its offspring live out their larval stage in the subcutaneous layer of the skin of mammals, including humans. Infection causes painful, weeping pustules.

Botfly larva end up wherever they are laid and sometimes this can be in the eye. Larva can be quite large, growing as large as 5 mm long and 2 mm wide. That is nearly one-fifth of an inch long, and living in your eye.

Parasitic infections of the eye are relatively uncommon in people who never leave the country. When you do travel the world, always avoid locations with poor sanitation, eat only thoroughly cooked foods, and exercise good hand-washing habits to avoid developing a monster in your eye. 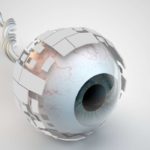