Patients themselves have expressed concerns about the return to in-person medical conferences.8 On Twitter, patients have said they are worried about receiving care from oncologists who were recently at conferences without mask mandates.

“I think it is a very real concern on the part of patients,” Dr Moore said. “I think it’s a disappointment to many when we see those in the medical or scientific community who aren’t adhering to best practices, especially when they are patient facing.”

Worth the Risk: Connections vs COVID-19 Exposure

The risk calculation differs for conference attendees who are not in patient-facing roles, such as David Steensma, MD, the global hematology head at Novartis Institutes for BioMedical Research. Dr Steensma said he only had to consider his personal and family health risks, which he believes to be low.

Over the past few months, Dr Steensma has been on 9 different trips, traveling to the AACR Annual Meeting in New Orleans, the ASCO Annual Meeting in Chicago, and the European Hematology Association (EHA) Congress in Vienna, among others.

“After each of these meetings, I received notifications, either directly from the meeting or elsewhere, that I’d been exposed to people with COVID,” Dr Steensma said. He continued to test during travel and after his return and said he feels “really, really fortunate” not to have been infected this year.

The opportunity to meet with colleagues in person outweighed the personal risk, Dr Steensma said, but he added that each person has to make that determination based on their own situation and the conditions at the time.

“I’m glad I went to these meetings because, in each of them, I learned things and made connections with people that I would not have done if it was virtual and everything had to be scheduled,” he said.

Matt Cooperberg, MD, a professor of urology and epidemiology & biostatistics at the University of California, San Francisco, has also attended a number of medical conferences this year.

Dr Cooperberg said that conference organizers and attendees are still figuring things out, but the opportunity to attend in person is important, and the risks of COVID-19 are a part of everyday life. He added, however, that there need to be reliable strategies to allow for virtual and in-person participation by meeting faculty and other attendees.

It remains unclear whether, or how much, medical conferences are contributing to the spread of SARS-CoV-2, as there is no formal system to track infections.

ASCO encouraged frequent testing at its annual meeting and asked attendees to isolate if they tested positive, in accordance with guidelines from the US Centers for Disease Control and Prevention (CDC).4,9 However, self-reporting of positive test results was not required.

“Knowing that exposure was not limited to the meeting itself and could also take place in airports, taxis, restaurants, etc., we asked those who tested positive to notify everyone they were in close contact with,” ASCO said in an emailed statement.

There were 5 cases of COVID-19 reported onsite at the AACR Annual Meeting in April, according to AACR. Individuals who tested positive at the meeting’s onsite testing location were required to isolate for the remainder of the conference and asked to inform their close contacts.

AACR did not track infections outside of what was reported at the onsite testing location, and reporting of results from any other tests was voluntary, according to Rick Buck, chief communications officer and vice president of communications and public relations for AACR.

Some oncologists have posted on Twitter about testing positive for SARS-CoV-2 themselves or hearing from colleagues who have come back from a conference with COVID-19. 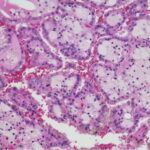