For example, overall survival (OS) results from the phase 3 TROPiCS-02 trial support the use of sacituzumab govitecan over chemotherapy in patients with endocrine-resistant, hormone receptor (HR)-positive, HER2-negative, advanced breast cancer.1

Long-term results from the phase 3 GIM2 trial support a chemotherapy dosing schedule of every 2 weeks, rather than every 3 weeks, in patients with node-positive, early breast cancer, regardless of HR status.2

Final results from the phase 3 DATA trial suggest that extending aromatase inhibitor (AI) treatment beyond 5 years of sequential therapy is only beneficial for certain postmenopausal patients with HR-positive breast cancer.3

And results from the phase 2 METEORA-II trial suggest an all-oral metronomic chemotherapy regimen can provide efficacy gains — but more toxicity — when compared with single-agent paclitaxel as first- or second-line therapy in patients with estrogen receptor (ER)-positive, HER2-negative metastatic breast cancer.4

The trial (ClinicalTrials.gov Identifier: NCT03901339) enrolled patients who had received at least 1 taxane, endocrine therapy, and CDK4/6 inhibitor in any setting, as well as 2-4 chemotherapy regimens in the metastatic setting.

“The statistically significant and clinically meaningful benefit of sacituzumab over TPC [treatment of physician’s choice] in the TROPiCS-02 study supports the use of sacituzumab as a novel therapy for patients with pretreated, endocrine-resistant, hormone receptor-positive, HER2-negative metastatic breast cancer,” said study presenter Hope S. Rugo, MD, of the University of California, San Francisco.

“The results, in my opinion, are clinically meaningful and should lead to regulatory approval,” said study discussant Meritxell Bellet Ezquerra, MD, PhD, of Vall d’Hebron Institute of Oncology in Barcelona, Spain.

However, she drew attention to the fact that screening failures occurred in 30% of patients, which means the results may not apply to at least one-third of patients with metastatic breast cancer in this advanced setting.

End-of-study results from the phase 3 GIM2 trial suggest that dose-dense chemotherapy can improve both disease-free survival (DFS) and OS in patients with node-positive, early breast cancer, regardless of HR status.2

In a prior analysis, with a median follow-up of 7 years, dose-dense chemotherapy improved DFS, but there was no benefit observed with F-ECP over ECP.6

Based on these results, Dr Del Mastro concluded that dose-dense chemotherapy should be considered among the optimal regimens for node-positive breast cancer patients who are candidates for adjuvant chemotherapy, irrespective of HR status.

The results confirm that moderate efficacy gains from chemotherapy can translate to clinically relevant gains in OS, irrespective of biomarkers, he explained. 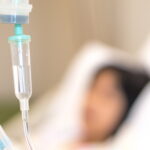