Transcranial magnetic stimulation (TMS) may effectively treat depressive symptoms in people with multiple sclerosis (MS), according to preliminary data presented at the 2022 Annual Meeting of the Consortium of Multiple Sclerosis Centers (CMSC) held from June 1-4, in National Harbor, Maryland.

Researchers conducted a quantitative study to assess the efficacy of TMS in treating depressive symptoms for 20 people diagnosed with MS.

The researchers analyzed the change in depressive symptoms by administering the Beck Depression Inventory and examining each patient at baseline and at the end of each session. Of the 20 patients in the study, 30% presented with depression at baseline.

“Multiple sclerosis…causes several physical and mental symptoms, with depression being a frequent symptom,” the researchers concluded. “This preliminary study suggests that TMS has potential for treating depression in people with MS.” 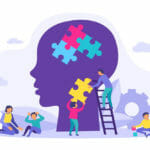