The Food and Drug Administration (FDA) has extended the review period for the New Drug Application (NDA) for AMX0035 (sodium phenylbutyrate and taurursodiol) for the treatment of amyotrophic lateral sclerosis (ALS).

The new Prescription Drug User Fee Act (PDUFA) target date is September 29, 2022. The FDA extended the action date by 3 months to allow more time to review additional data from clinical studies. The agency considered this information to be a major amendment to the application.

AMX0035 is an oral, fixed-dose coformulation of sodium phenylbutyrate and taurursodiol, also known as ursodoxicoltaurine. The application, which was accepted for Priority Review in December 2021, includes data from the randomized, double-blind, placebo-controlled phase 2 CENTAUR trial (ClinicalTrials.gov Identifier: NCT03127514), along with the open-label extension study (ClinicalTrials.gov Identifier: NCT03488524).

Results from CENTAUR showed that AMX0035 met the primary endpoint demonstrating a statistically significant slowing of functional decline, as measured by the Revised-ALS Functional Rating Scale. After a follow-up of 3 years, interim survival analysis showed that patients who received AMX0035 during the placebo-controlled phase of CENTAUR had a 44% lower risk of death compared with those who received placebo during the placebo-controlled phase.

“We are confident in the potential of AMX0035 to help people living with ALS and other neurodegenerative diseases, and we continue to work closely with the FDA as they complete their review,” said Justin Klee and Joshua Cohen, Co-CEOs and Co-Founders of Amylyx. 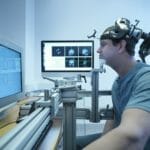 TMS for Multiple Sclerosis: Can It Help Treat Depressive Symptoms?