Researchers using positron emission tomography (PET) imaging to visualize binding patterns of tau, amyloid, and TDP-43 in various cortical and subcortical regions of the brain in a subject with suspected chronic traumatic encephalopathy (CTE) have reported the first case of postmortem confirmation of CTE. The findings were published in Neurosurgery.1

In a previous study, the subject, a former National Football League player with a 22-year cumulative lifetime exposure to football, underwent neurpsychiatric evaluation and 2-(1-{6-[(2-[F-18]fluoroethyl)(methyl)amino]-2-naphthyl}ethylideine)malononitrile ([F-18]FDDNP)-PET imaging 52 months prior to his death.2

The subject, along with 4 other participants with similar socioeconomic backgrounds and environmental exposure to traumatic brain injury, demonstrated significantly higher FDDNP signals in subcortical regions of the brain, as well as the amygdala, compared with healthy controls (P = .03). The investigators also noted an increase in FDDNP binding levels with an increase in the number of reported concussions.

In the current study, which followed the death of the subject and subsequent examination of the brain and spinal cord, investigators identified tau neuropathological substrates that were in agreement with the findings from the [F-18]FDDNP-PET imaging study. Based on Spearman correlation analysis, the investigators reported a high correlation between the tau regional findings and densities identified through [F-18]FDDNP-PET imaging and postmortem autopsy (rs= -0.592; P =.0202), with the highest relative distribution volumes observed in the parasagittal and paraventricular regions of the brain and brain stem. Notably, no correlation was found between [F-18]FDDNP-PET binding levels and amyloid or TDP-43 deposition.

The findings suggest that [F-18]FDDNP-PET binding patterns may be consistent with neuropathological patterns of tau deposition in patients with CTE.

“Our prior research and current findings are indicating that [F-18]FDDNP-PET brain imaging may be a useful in vivo radiological tool for the clinical assessment and diagnosis of traumatic encephalopathy syndromes including CTE, CTME, and CTEPTSD (post-traumatic stress disorder),” the investigators concluded.

While the findings need to be replicated in larger cohorts, they represent a plausible step towards risk stratification and early intervention in at-risk populations. 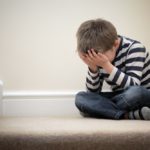 Childhood Abuse Linked to Migraines and Neuroticism Later in Life