“Jackson Whites” is a pejorative term for a group of people who have been living for centuries in the beautiful and remote Ramapo Valley, a breathtaking section of the Ramapo Mountains that crosses the New York/New Jersey border at Suffern, NY. Many believe this name is short for “Jacks and whites,” with Jacks purportedly having been slang for runaway slaves; however, this is just one of many currently unprovable myths regarding this population. The group has mainly a Native American, African American, and Caucasian heritage. They prefer to use the Dutch spelling to describe themselves as the Ramapough Mountain Indians; they also go by the name of Lenape Nation. There is little documentation of their over 300-year history in the area, largely because the Lenape people had no written language.

Many of these people have albinism that gives them notable facial and skin characteristics. Their mixed heritage, unique appearance, and secretive lifestyle have captivated the attention of journalists, sociologists, and other outsiders since the 19th century. They live in 3 clusters in the area. In the north, they inhabit Sloatsburg, Ladentown, and Haverstraw, New York. Two additional groups live in Ringwood and Stag Hill (Mahwah), NJ.

In addition to Native Americans, it is believed that these people are also descendants of Hessian soldiers who deserted during the American Revolution. Runaway and freed slaves make up the third major component of this group; they are responsible for the Dutch surnames common among the people, which were derived from the surnames of their owners, likely nearby landholders.

The Ramapough Lunape website discusses the Native American vein of this group, describing how an Indian named Maanis sold a deed to Wynant Van Gelder for land that later became the town of Sloatsburg, NY. Maanis lived in Mahwah, where Stag Brook runs into the Ramapo River. Maanis’ son Peter later changed his last name to Mann, which is now a popular surname among the Ramapough Mountain Indians. Other common surnames include De Frees and De Groat. The commonality of surnames, along with isolationism and forbidding topography, suggests possible intermarrying among the population.

The Ramapo Mountains are a forested, rugged chain of the Appalachian Mountains. The difficult topography has resulted in shyness, secrecy, and isolation among the natives there. This isolated lifestyle and harsh terrain severely limited fresh entries into the gene pool and possibly increased the likelihood of disorders such as albinism. Snuggled in the mountains since before the Revolutionary War, these people were largely forgotten and overlooked.

That all changed in the 1840s when the railroads cut through the Ramapo Mountains. Rail workers would travel to the mountainsides to harvest wood for use as rails and fuel for the trains. Reluctant to share personal information, the people of the Ramapo Mountains told the workers fictionalized accounts of their history and lifestyle. Their lack of writing, isolated lifestyle, fictionalized tales, and unique appearance caused speculation from the outside world about their history, and led to the creation of legends and folklore.

Many consider “Jackson Whites” to be a racial slur or at least a derogatory moniker because some outsiders use it to focus on supposed peculiar attributes of these natives of the Ramapo Mountains. In the decades after the railroads arrived, waves of 20th century historians, social workers, archeologists, and reporters have rediscovered this population. With every wave comes a new round of renewed interest in the secretive past of these people.

In a 1972 article in American Anthropologist, Daniel Collins described the physical characteristics of this group in detail. He says hair texture can be kinky or straight and that some individuals “have facial characteristics which appear to be distinctly Indian, and others seem more Caucasian or Negro in their conformation.” Collins described the skin pigmentations as ranging “from brown through red-brown, tan (called “coffee” locally), white, and albino.” At least Collins got the condition right when he said that albinism was common in this population. Many people mistakenly thought the light complexion was the result of another genetic condition known as piebaldism. While there are many similarities between the 2 conditions, they are distinct and independent of one another.

Albinism is a strong component of the legends associated with this group. Many point to albinism as proof of intermarriage, loathing for accepted social conventions, or even a basic character flaw. Other misconceptions center on an insinuated lowered intelligence, unfaithfulness, or lack of morals.

These misconceptions were more pronounced decades ago, when racial divisions in the country perpetuated such misunderstandings. Unfortunately, racial misapprehension and mistrust of albinism persist today, both in the US and around the world. In fact, a Tanzanian woman with albinism was murdered and mutilated in May 2014. In that country, people with albinism are subject to murder by traditional healers who harvest body parts to make potions; 73 people with albinism have been murdered since 2000, and 67 more have been attacked violently in that time.

Albinism is an autosomal recessive condition that requires 2 defective genes to affect melanocyte development. There are 2 types of albinism: oculocutaneous albinism and ocular albinism. The latter affects only the eyes and not the skin. This population is more likely to have the former type. Oculocutaneous albinism affects the pigment of the hair, skin, and eyes. Individuals with this condition usually have fair skin and light or white hair. Sun exposure increases skin damage and the risk for melanoma. Oculocutaneous albinism reduces iris pigmentation and retinal sensitivity. Individuals with this condition may have problems with visual acuity, nystagmus, and photophobia.

There are 4 types of oculocutaneous albinism, each caused by a mutation in a single gene: TYR, OCA2, TYRP1, or SLC45A2. Changes in TYR (type 1) cause white hair, very pale skin, and light-colored irises, whereas changes in OCA2 (type 2) result in creamy white-colored skin and light yellow, blond, or light brown hair.

Types 1 and 2 are the most common. Type 2 occurs more often in African Americans, some Native American populations, and sub-Saharan Africans. Types 3 and 4 are less common. TYRP1 mutations cause type 3, which occurs primarily in people from southern Africa and results in reddish-brown skin, ginger or red hair, and hazel or brown irises. Type 4, which arises from mutations in SLC45A2 to cause characteristics similar to type 2, occurs more frequently in Japanese and Korean populations.

Piebaldism is a rare autosomal dominant condition, requiring only a single defective gene to affect melanocyte development. It may be associated with the genes KIT and SNAI2. KIT gene protein signaling is important to the development of melanocytes, among other cells. The loss of KIT signaling likely disrupts the growth, division, and movement of melanocytes during development, which causes the characteristic lack of pigment in patches of skin.

The SNAI2 gene, sometimes called SLUG, provides instructions for making snail 2 proteins required for neural crest cell development. Neural crest cells move from the spinal cord to specific regions of the developing embryo, where they aid in the development of other tissue types, including melanocytes. Piebaldism is often confused with vitiligo, a condition that also causes nonpigmented patches of skin. Vitiligo develops later in life and is not the result of genetic mutations.

Myths regarding these elusive natives of the Ramapo Mountains are likely to continue well into the future, as will the undeserved stereotypes that have been assigned to them, especially if they decide to remain hidden in their lovely landscape. 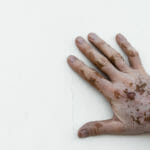