While there is a clear association between major depressive disorder (MDD) and migraine, data published in Cephalgia provide evidence for divergent association of lifetime MDD, and MDD subtypes, with the prevalence and severity of symptoms in patients with migraine with and without aura.

It is well known that migraine and depression show a high rate of comorbidity and previous studies have suggested the association is bidirectional, with each disorder increasing the risk for onset of the other. However, limited data are available on the association between MDD subtypes and migraine.

Combined MDD, which included subjects with both melancholic and atypical characteristics, was found to be associated with higher migraine frequency, regardless of migraine subtype.

The researchers acknowledged that the study had several limitations, including its cross-sectional design, use of semi-structured interviews that can be associated with inaccurate recall of remote episodes, and a relatively small sample of patients with atypical or combined MDD. 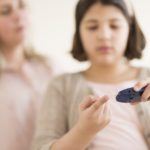 Early-Onset CVD Rate Up for Children of Moms With Diabetes