Stool microRNA (miRNA) profiles are associated with specific diets, with lipids propelling epigenetic modifications and host-microbial crosstalk in the gut, according to a study recently published in Gut.

In total, 120 participants were included in the study (72 women) and divided into groups based on diet: 40 participants followed an omnivorous diet, 40 a vegetarian diet, and 40 a vegan diet. Small RNA analysis and shotgun metagenomic sequencing were performed on fecal samples. Additionally, participants filled out a food frequency questionnaire (FFQ) to assess their typical diet and lifestyle practices.

Participants who adhered to an omnivorous diet had slightly higher body mass indexes (BMIs) compared with the vegetarian and vegan groups (23.6 kg/m2 vs 21.9 kg/m2 and 21.8 kg/m2, respectively). The same was noted in terms of waist circumference, with participants in the omnivore group having larger circumferences vs the vegetarian and vegan groups (83.8 cm vs 78.1 cm and 78.9 cm, respectively).

Having a significant role in lipid metabolism, miR-636 and miR-4739 expression levels decreased as duration of time adhering to a nonomnivorous diet increased. This occurred independently of age.

In addition, targets of stool miRNAs upregulated in vegetarian/vegan subjects were enriched in both lipid and folate metabolism. Participants in the vegan and vegetarian groups were characterized by high stool levels of miR-425-3p, an miRNA related to lipid metabolism. Participants with the highest levels of miR-425-3p expression, regardless of diet group, showed higher abundance of Akkermansia muciniphila, Roseburia hominis, and Roseburia sp.

In terms of limitations, investigators acknowledge they cannot exclude the possible influence of other cellular components of the gastrointestinal system, such as those originating from the stromal or immune compartments, on study results.

The authors noted their results “show a gradual modulation of the human miRNome as a consequence of different dietary regimens with important modifications in miRNAs involved in lipid and folate metabolism.” “Stool miRNA profiles and microbiome composition, together with dietary nutrients, can accurately distinguish different diets and strengthen the evidence of host-gut microbiome crosstalk,” they concluded. 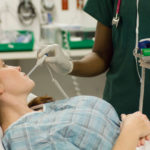