Previous studies have indicated more severe symptoms of osteoarthritis (OA) and higher rates of arthroplasty in patients with type 2 diabetes (T2D).1 In addition, it has been suggested that long-term insulin use may overload some tissues with enriched insulin receptor, which may affect pain perception.2 A hospital-based cohort study published in BMJ Open Diabetes Research & Care found sex heterogeneity in the relationship between T2D and severity of OA symptoms and an association between insulin treatment and pain severity in men.3

A total of 700 patients with OA and total arthroplasty, or those waiting for the surgery, volunteered to take part in the study. Eligible patients experienced pain at the hip and/or knee joints. Comparisons for pain severity were made between patients with T2D, who were clinically diagnosed with T2D or were self-diagnosed with a fasting blood glucose of ≥126 mg/dL, and patients without diabetes. Patients with other conditions, such as rheumatoid arthritis, lupus, avascular necrosis, and fractures, were excluded.

Participants used a numerical rating scale from 0 to 10 to report the pain severity in each affected joint. Pain severity scores were calculated by adding the number of painful joints with the highest pain rating reported for any joint. Men with T2D had a slightly higher pain severity score than their counterparts without diabetes (P =.01), including in non-weight-bearing joints. In men, the most severe pain score was found in those receiving insulin treatment compared with all other patients (P =.025). Similar associations were not found in women. The most significant indication for pain severity in women was waist circumference, irrespective of body mass index (P =.002).

This study found that men with T2D and OA, and especially men receiving insulin treatment, report higher pain severity, have more joints affected by pain, and consume more analgesics than men without diabetes. The presence of pain in non-weight-bearing joints, such as the hands, might suggest that diabetic neuropathy affects the severity of OA. As sensorimotor neuropathy presents earlier and has a higher prevalence in men with diabetes than in women, this may explain the sex difference in reported pain severity. The association of pain severity with waist circumference in women fits a previously proposed theory that there is a link between metabolic syndrome and chronic pain.4 The role of diabetic medication in OA pain had not been explored before this study, noted the researchers, and the effect of insulin administration on OA progression requires further investigation. 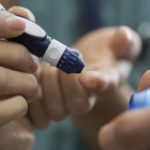