Although EVT has been shown to improve neurologic outcomes in cases of AIS secondary to large vessel occlusion, limited data are available on the optimal blood pressure targets during the intervention. The goal of the current study was to explore the association between procedural blood pressure parameters, including specific blood pressure thresholds, with functional outcome after EVT for AIS.

The study included adults with anterior circulation AIS enrolled in 3 randomized clinical trials assessing anesthetic strategy for EVT: SIESTA (Sedation vs. Intubation for Endovascular Stroke Treatment), ANSTROKE (Anesthesia During Stroke), and GOLIATH (General or Local Anesthesia in Intra-Arterial Therapy). Although in the first 2 studies, noninvasive blood pressure measurements were performed every 5 minutes during the EVT procedure; in the latter study, invasive blood pressure parameters were recorded every minute.

The patients were followed up for 90 days, and the primary outcome was functional outcome as defined by the modified Rankin Scale (mRS) score at 90 days.

A total of 365 patients (mean age 71.4 years, 44.6% women, median National Institutes of Health Stroke Scale score 17) were included in the analyses. Half of the subjects received general anesthesia (182 patients, 49.9%) and half received procedural sedation (183 patients, 50.1%).

The study had a number of limitations, according to the researchers, including the retrospective analysis, possible selection bias, and limitations secondary to the fact that blood pressure was mostly measured every 5 minutes during the EVT procedure.

“These results suggest MABP may be a modifiable therapeutic target to prevent or reduce poor functional outcome in patients undergoing EVT for AIS and that MABP should possibly be maintained within such narrow limits,” concluded the researchers. 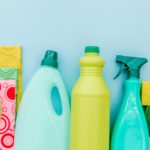 Wheeze, Asthma Risk Up With Cleaning Product Use Exposure in Infancy