Nearly one-third of patients with nonoperative, node-negative non-small cell lung cancer (NSCLC) did not receive guideline-recommended treatment in a study published in the Journal of the National Comprehensive Cancer Network.

Although the optimal treatment for this population is not well defined, National Comprehensive Cancer Network (NCCN) guidelines recommend treatment with definitive radiotherapy (RT) with or without sequential chemotherapy.

Researchers evaluated adherence to this recommendation in a retrospective study of 2,020 patients from the National Cancer Database. The patients were diagnosed with nonmetastatic, node-negative NSCLC from 2004 to 2016. All had tumor sizes of 5 cm to 7 cm and received definitive RT.

In a multivariable analysis, the odds of receiving nonadherent treatment were significantly higher for the following groups:

Insurance type, sex, and year of diagnosis were not associated with nonadherence.

In a univariable analysis, the risk of death was higher among patients who did not receive the guideline-recommended treatment.

The researchers concluded that “a substantial portion of inoperable patients with large, node-negative NSCLC are not treated according to NCCN guidelines…, but adherence to NCCN guidelines was not associated with differences in overall survival.” 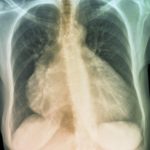