Lipid metabolism is associated with the risk of developing amyotrophic lateral sclerosis (ALS), according to study results published in the Journal of Neurology, Neurosurgery, and Psychiatry.

Premorbid metabolic profiles can provide insight into relevant biomarkers including high-density lipoprotein (HDL) and apolipoprotein A1 that may be used as targets for preventative therapies or for ALS screening.

Since factors contributing to the development of ALS are largely unknown, the researchers of this large-scale cohort study sought to examine a range of metabolic parameters on the risk of developing a subsequent ALS diagnosis in over half a million individuals enrolled in the UK Biobank.

Data from 502,409 individuals with ALS were examined prospectively, in which incident ALS cases were analyzed in relation to baseline levels of previously established metabolic biomarkers: blood HDL and low-density lipoprotein (LDL); total cholesterol; total cholesterol to HDL ratio; apolipoproteins A1 and B; triglycerides; HbA1c; and creatinine levels. Participants were also evaluated for self-reported physical activity and body mass index. Individuals with an ALS diagnosis at baseline were left out of the sample.

Study limitations included a specific UK population that does not necessarily reflect the general population and potential misidentification of ALS cases, which may lead to biased estimates.

Higher baseline levels of the metabolic markers HDL and apolipoprotein A1 — with correspondingly lower total cholesterol to HDL ratio — were associated with a reduced risk for ALS diagnosis during follow up.

Researchers suggest future studies elucidate the mechanism of HDL and apolipoprotein A1 in the pathogenesis of ALS.

“Understanding the molecular basis for these changes will inform presymptomatic biomarker development and therapeutic targeting,” they concluded. 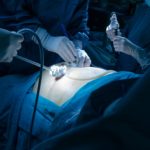