Patients receiving certain monoclonal antibodies (mAbs) for asthma management should be closely monitored following treatment administration as these medications have been associated with positive anaphylaxis signals, according to the findings of a real-world study published in Clinical and Translational Allergy.

Data mining resulted in 2006 reports of anaphylaxis related to the use of 5 mAbs: benralizumab, dupilumab, mepolizumab, omalizumab, and reslizumab. “The clinical characteristics of the cases were analyzed, and the risk signals of anaphylactic reactions and corresponding outcomes were investigated in the 5 mAbs,” the authors explained.

The analysis also revealed a significantly increased risk of initial or prolonged hospitalization due to anaphylaxis in patients who received benralizumab compared with omalizumab (42.86% vs. 28.92%, respectively; P=.024). When anaphylaxis occurred in patients who received omalizumab, an increased risk of life-threatening outcomes was observed in patients treated for asthma compared with those receiving therapy for chronic urticaria (18.0% vs. 12.9%, respectively; P=.022).

“In the current real‐world study, omalizumab, benralizumab, reslizumab, and mepolizumab had positive signals for anaphylaxis, suggesting the need for close monitoring of patients after drug use,” the study authors concluded. “Increased attention and alerts are especially required for mepolizumab, which had almost no report of anaphylaxis in the literature.” 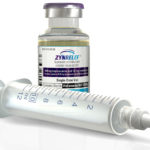 Zynrelef Now Available for Postsurgical Analgesia for Up to 72 Hours