What is the one thing that makes you the angriest?

Watching Ray Rice hit his future wife? The passing of Obamacare? How Michael Brown was killed? The definition of “discipline” according to Adrian Peterson? Or how the world has handled the Ebola crisis?

For me, it’s something less controversial and less obvious: a sugary, sweetened beverage.

The image of a crisp can of Coke, glistening in the sun, being provocatively sipped by Sophia Vergara, makes me lose sleep at night. Why? Because sugary, sweetened beverages are slowly killing millions of children.

Place a group of obese children in an elevator and watch the surveillance camera. They will stand there, and you will yawn because nothing’s happening. Unlike the footage of Ray Rice hitting his fiancée, this will never go viral or cause public outrage.

But the violence this camera doesn’t capture is the war being raged on the inside. Small arteries are being destroyed, cells are being inflamed with cytokines, and these kids’ blood pressure and blood sugar levels are rising.

That can of Coke is setting them up for a lifetime of physical ailments, including heart disease, stroke, diabetes, and early death.

Repercussions of childhood obesity are not limited to the physical. They also include depression, anxiety, low self-esteem, and substance abuse. Interestingly, these are the same psychological stressors with which women and children who are abused suffer.

When Ray Rice hits his future wife and Adrian Peterson “disciplines” his son, the world is horrified. When a mom buys her 5 year old a 16-oz sugary beverage, because it’s cheap and advertising says so, the world ignores it.

Is there a difference?

They all cause harm. They’re all public health issues. But only 3 of them are trending on Twitter, receiving social media attention, and actively enraging the public.

As a medical resident, I saw the effects of sugary, sweetened beverage consumption every day. In 2012, I attempted to address it head on.

I helped create Massachusetts House Bill 1697: An Act to Reduce Childhood Obesity by Removing the State Subsidy for Sugared Sweetened Beverages and Candy. This bill was simple. In the state of Massachusetts, sugary, sweetened beverages are considered essential, thus not taxed. Ironically, toothpaste is taxed, which per the law’s reasoning is not essential.

The goal of House Bill 1697 was to lift the tax exemption on soda. During my testimony in favor of the bill, I asked the chairman, “How can we hope to create a culture of change when the message given is that sugary, sweetened beverages are essential to our health?”

I was told the current political climate would not support lifting the tax exemption. The advice: try again another year. The following year, with the help of the Boston Foundation, a colleague and I launched “The No Soda Rx” campaign. We distributed hundreds of “No Soda” prescription pads to pediatricians around Massachusetts.

We also presented state politicians with medical testimony of obese patients with early and avoidable type 2 diabetes and the statistic that “1 out of every 3 children is overweight or obese.”

In 2013, House Bill 2634 was introduced. Again, it aimed to eliminate the tax exemption on sugary, sweetened beverages. This time, the new funds raised by removing the sugary, sweetened beverage tax exemption would be directed to a prevention and wellness trust for the state. Once more I testified, citing a new report from UNICEF comparing the health of children in the richest countries. That report shows the US as one of the richest countries in the world with the unhealthiest children.

We stood before the Joint Committee of Revenue and presented the economic data. In 2010, the American Journal of Public Health published a study that looked at consumption rates of food related to price elasticity. The researchers found that soft drinks and juices are the most responsive to price changes. Raising the price of soft drinks by just 10% would decrease consumption by at least 10%. Decreasing consumption in Massachusetts by 10% would equal almost $4 million in savings.

When I realized this economic argument was boring the Revenue Committee (one member actually yawned), I pleaded: “This is not a drastic proposal. This is removing preferred tax status from products that have no nutritional value and have a proven link to rising youth obesity. Removing this preferred tax status is the least we can do to change consumption patterns to help improve the health of our nation’s children.”

Most doctors are in favor of passing this law to better public health. What was our campaign missing to pass this law?

Twelve million children in America are unknowing victims of sugary, sweetened beverages. Not only do these children not understand how their consumption is destroying their health, but media and top-tier marketing campaigns only reinforce this deadly habit.

So, as hashtags like #WhyILeft, #MichaelBrown, and #AdrianPeterson trend, take a moment to remember that a deadly situation is occurring within the bodies of 1 out of every 3 American children. Try as I might, I can’t get the government to act or social media to create a storm.

And that makes me angry. 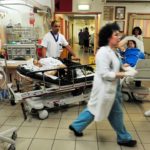 Emergency Departments. If You Build It…