Here’s another. A woman in a strongly Catholic country, in order to get contraceptives, had to go to her priest and convince him of the need. The priest asks her, “How many pregnancies have you had?” She answers “fourteen.” “And how many children do you have?” “Six.” The priest looks at her and says, “Come back when you have eight.” This was in the 20th century.

We’ve made a lot of progress, right? Very few people really think it’s good for women, children, or society to have such a high birth rate, especially when infant mortality is so low. But here’s another story. A state senator, Pete Kelly from Alaska, is interviewed by a local paper. He is advocating putting free pregnancy tests in bar bathrooms. The interviewer asks him if he would do the same for birth control. Here’s what this senator says: “Birth control is for people who don’t necessarily want to act responsibly.” When did this interview take place? 1700s? Twentieth century? No. Three months ago.

I fervently hope, for the sake of Jane and Catholic women everywhere, that Mr. Kelly is talking about condoms, not pills. It’s not clear that he is. But let’s stipulate just for a second that Kelly is right. People who have sex are irresponsible. He’s trying to prevent fetal alcohol syndrome (FAS), a noble goal. There are 2 components of FAS. There’s the “fetal” part, and then there’s the “alcohol” part. Kelly is trying to prevent the alcohol part, but has no interest in preventing the fetal part. This from a man who called abortion an “American Holocaust.”

Why is he comfortable with federal and state funding for an intervention that might prompt women to check to see if they are pregnant before an evening of drinking, but not government support for preventing the pregnancy that will occur later on that night?

You see, the problem is sex. Nobody wants abortions because of unplanned pregnancies, or FAS from drinking before you know you’re pregnant. No one is advocating for teenage mothers or HIV epidemics. Few people outside of the Duggars think having 20 children is a good idea. The problem is that babies come from having sex. What Pete Kelly, the state senator from Alaska quoted above, really wants is for people to stop having sex. Sex is irresponsible. Drinking is too, sometimes, but it’s not fraught with the same religious and moral baggage that sex is.

So let’s look at that. Having sex is, sometimes, irresponsible, no question. Drunken one-night stands or cheating on your husband or wife, those sorts of things are definitely irresponsible. But it’s irresponsible in a way that is not only inevitable but carries great risk of long-term consequences. People will have sex. They will have irresponsible sex. Humans are only partially rational and if it feels good, we generally want to do it. But to have sex without birth control can compound a moment of irresponsibility into a lifetime of problems for everyone in society.

What Senator Kelly might really be saying is that irresponsible people, ie, people who have sex, don’t deserve to have free access to the things that might prevent that lifetime of problems. If they want birth control and condoms, they can darn well pay for them themselves, since the whole thing is their own fault. Giving them free prevention measures will just encourage them to continue their irresponsible sexual acts. That’s why he funds the tests and not the condoms. OK, fine, there is some sort of sick logic to that. The Punishment Theory.

And then there’s the question of why pregnancy tests are only in women’s bathrooms in bars? Why not put that dispenser right at the front door? And in frat houses?  And in fancy restaurants that cater to the 3-martini-lunch crowd? That way the men who come to the bar with the women can be just as responsible in their irresponsibility. Because baby makes 3, folks, not 2. Or maybe we should just ban women from drinking if they “are pregnant or may become pregnant,” meaning all women between the ages of 10 and 50. What we really should do is just stop having sex. That would be super responsible. Jane Franklin would drink to that. 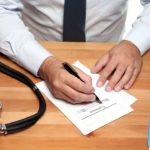