It’s late at night, walking back to your car after a long day at the office when suddenly you are fighting for survival against an attacker. Normally, help would come in the form of a fellow bystander, if any, but during this attack, your smartphone was used to deter the assailant. In the past few years, technology has been adapted for use in many ingenious ways, with a few companies offering solutions for life-events as described above.

Smartphone apps, such as iWitness [iOS] [Android] and SafeTrek [iOS], provide easy-to-access features to assist users in the event of an attack. Unsure if that dimly lit parking lot looks safe? Simply arm iWitness, and the app will start capturing video and audio of your surroundings and send that data to a secure server, along with your GPS location. The app is capable of more than this though; at the ready is the ability to enable a beam of light capable of blinding people, or if the situation calls for it, an emergency mode by simply tapping on the screen. With emergency mode enabled, simply point the camera at the person or situation and the phone will call 911, sound an ear-numbing alarm, and notify trusted contacts, whom you have pre-selected, of the situation.

Similar to iWitness, SafeTrek allows users to proactively bridge the gap between doing nothing and calling 911 depending on the situation. By launching the app, users can passively connect to police by simply pressing the button on the screen. If a dangerous event does occur, simply removing your finger from the screen will alert authorities. During this time there is a 10 second window to either disarm the notification using a 4 digit pin, or allow the time out to occur for 911 to be contacted.

Taking self-defense even further, products like Yellow Jacket and Defender have designed cases or peripherals that will fit iPhones and other smartphone devices. The cases from Yellow Jacket include a high voltage stun gun, which is deployed within seconds via a button on either side of the case. The stun gun unleashes a 950,000 volt shock to the attacker. There are, of course, safeguards in place to ensure the device doesn’t accidentally activate during normal use.

The Defender, available for pre-order at this time, is a peripheral that connects to the smartphone via Bluetooth. The peripheral is essentially an integrated camera with a pepper spray canister, when activated, takes a picture of the attacker while releasing pepper spray. All the while, the device, via Bluetooth, will connect to a 24/7 security monitoring service that will alert authorities. Additional features that are included are GPS tracking that will alert authorities of when and where the attack is taking place and a siren to attract attention and disorient the target.

There were many iterations of these technologies; improvements were made, streamlining use and functionality to offer better tools for those who might be better served by them. With each passing year those changes are brought to life, from concept to reality. Each of these technologies mentioned are by no means a final list, but a glimpse into what we as users have available to us. Do you feel these types of technologies are necessary? Would they make you feel safer? Regardless, it’s best to remain cautious by following a few simple steps: 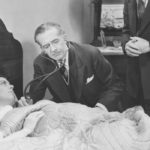