The survival rates for out-of-hospital cardiac arrests are slowly decreasing, according to a study published by JAMA — stating that it affects 55 out of 100,000 inhabitants in the United States alone. The main cause for low survival rate is the timing of administered defibrillation.

Drones, also known as unmanned aerial systems, are being adopted for the use of simulated out-of-hospital cardiac arrests. In this study, the drones have an automated external defibrillator (AED) weighing 763 grams when fully attached.

The drone was outfitted with “a global positioning system, high definition camera, and integrated with an autopilot software system.”

Drones are a strong competitor with Emergency Medical Services (EMS), attributed to the extremely short amount of time it takes a drone to reach its destination. “The median time from call to dispatch of EMS was 3 minutes; the median time from dispatch to drone launch was 3 seconds.”

The study took place in Norrtälje, Sweden in October 2016 to determine how well the drone could respond in a “restricted airspace, extensive delay in EMS response times, and a heavy population in the summer.” The drone was located at the Norrtälje fire station, where drones were dispatched to targets within a limited distance. The motive for the location was chosen due to the astronomical quantity of out-of-hospital cardiac arrests taken place within 10 kilometers of the fire station.

The results were extraordinary: the data determined that drones overwhelmingly surpassed EMS times from dispatch, as well as on arrival. The shortest time for an AED drone was 1 minute 15 seconds, while the EMS time was 10 minutes. “The drone arrived more quickly than EMS in all cases, with a median reduction in response time of 16:39 minutes.”

The limitations of this study were short distances and good weather. Traffic patterns dating from 2006 to 2014 should be acknowledged, moreover, to regulate former EMS response times. “However, whether they reduce response times in a real-life situation is unknown.”  Although the drone reached the target in a shorter amount of time, there is not a certified EMS to facilitate the AED. The drone cannot perform resuscitation and hinges upon a bystander being able to implement the treatment needed. 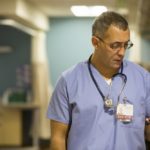 How Technology Can Actually Help Your Patients