When I was younger, for some reason people were forever asking me what my favorite part of medical school was. Lucky for me, I had an easy, satisfying answer — and one that had the added benefit of being true: near the end of my third year, I went on a volunteer trip to Haiti.

It was perfect — and not just because we got to spend 10 days in a tropical paradise. From the moment we arrived, I felt like I was finally — and despite having minimal Haitian Creole knowledge and no real technical competencies — making a difference.

For years, I’d been telling everyone who would listen that I was going to be a surgeon. That little hospital in Fort Liberté, Haiti, gave me the chance to assist on my first hernia repair, circumcision, and soft tissue excision (all on different patients, of course). The foreign environment afforded me new subjects and new collaborators for the research projects I’d been mulling over.

And if that wasn’t enough, on my way out I scooped up half a case of my favorite rum. I still didn’t know any Haitian Creole, but I couldn’t have been happier. It was a classic win-win.

Last year, the BMJ Global Health published a paper called “Global Surgery 2030: A Roadmap for High Income Country Actors.”1 The basic idea was that, since our best estimates suggest that 5 billion people worldwide lack access to basic surgical and anesthesia care, it was high time to boldly go where surgeons apparently haven’t been before.

A key part of this initiative involved tasking a panel of experts with promulgating a set of recommendations for extending surgical and anesthesia coverage to underserved communities around the world. Of note, separate sets of recommendations were explicitly directed at each of several stakeholder groups involved in medical care in first-world countries.

The recommendations for students and residents visiting foreign countries felt like they were written for, perhaps, me. The most pointed guidance was to move away from what they termed “surgical colonialism.”  This moniker covers everything from taking cases away from local residents, conducting research projects, and failing to sufficiently immerse yourself in the particulars of the host language and culture. Guilty as charged.

I shouldn’t be too harsh. Everyone’s heart was in the right place, including my own, probably. And those hernias I worked on weren’t going to repair themselves. But the BMJ group’s report made me think about things that I could have done to make my visit a win not just for me, but also for the people I was ostensibly trying to help.

They’re simple things really: actually make an effort to learn the language — or at least the barebones necessary to function in a clinic environment  ahead of time; ensure that the cases I handled couldn’t otherwise be managed by a local resident or medical student; focus on contributing to someone else’s research project, rather than looking for ways to buttress my own; take a minute to understand the impact that my actions might have on the local community; and buy a full case of rum on my way out.

Actually, the report inspired me to not just think about things that I could have done better, but also to look forward to the next time I make a similar excursion to Haiti or elsewhere. We still have a responsibility to expand surgical coverage around the globe —and there’s no sense in learning these lessons if we’re not going apply them. 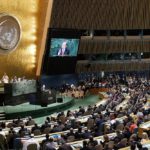 UN Calls on Polities to Help End Discrimination in Healthcare