The use of the court system to decide the fate of critically ill children is costly in many ways. Court decisions about the best interests of such children can often be based in uncertainty, unpredictability, and insufficiency. In an article published in the Journal of Medical Ethics, Richard Huxtable, PhD, of the Centre for Ethics in Medicine, Population Health Sciences at Bristol Medical School in England, suggests that specialist ethics support services may provide expert ethical advice in cases involving such children and avoid the use of the court system.

Against the backdrop of the Charlie Gard case in the United Kingdom, Dr Huxtable argued that the use of specialist services may allow more equitable solutions as they are less formal and adversarial than the courts. Charles Gard was an infant born with mitochondrial DNA depletion syndrome whose parents wished to use experimental therapy on him in an attempt to save his life. The treating hospital, Great Ormond Street Hospital in London, argued that to continue treatment was not in the child’s best interests and recommended palliative care only. The Charlie Gard case became an international cause célèbre, with the parents petitioning the courts to allow them to take their child to the United States for advanced therapy.

Dr Huxtable noted that the Children Act of 1989 holds that “the child’s welfare shall be the court’s paramount consideration,” but adds that it fails to define welfare. Although the courts have a legitimate role in settling disputes regarding treatment in life-or-death situations, particularly those involving children, the legal system may not be the best place to resolve such questions. Legal action can be stressful and disturbing, particularly in view of their win-or-lose mentality.

While suggesting that Clinical Ethics Committees can provide practical advice and have some advantages over the court system, Professor Huxtable acknowledged that they exist primarily to support clinicians. This brings into question their ability to advocate for patients and families and their independence from healthcare institutions. Furthermore, there are questions regarding the qualifications, certification, and competencies of their membership.

Dr Huxtable suggested that specialist clinical ethics support services may offer a way forward that could address the deficiencies of the current system. He argued, however, that further research is required to determine whether such services are effective. 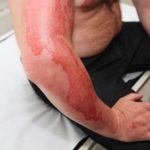 Strategies in Pain Management for Adult and Pediatric Patients With Burns