In late December 2005, Michael E. DeBakey, MD — the doctor who helped devise the surgery to repair aortic dissections — found himself having an aortic dissection at the age of 97 years. Little did Dr DeBakey know that he was about to make history yet again: not by pioneering another surgical procedure, but by becoming the center of an ethical debate about perioperative care in the elderly who have do not resuscitate (DNR) orders.1

Despite the realization that he was having an aortic dissection, Dr DeBakey refused to go to the hospital to be treated.1 Later, Dr DeBakey admitted that he refused hospital admission because he feared that he would become mentally or physically incapacitated if he underwent such a high-risk procedure at his age. He put it bluntly in an interview with the New York Times: “I’d rather die.”1 But by late January, Dr DeBakey was admitted to the hospital, where he became unresponsive. His physician and surgical partner of 40 years, Dr George P. Noon, MD, decided that the only way to save him was to operate.1

However, proceeding to surgery wasn’t so easy. Dr DeBakey had signed an advanced directive prohibiting resuscitation and had explicitly told the admitting physician that he did not want to undergo surgery for the aortic dissection.1 The hospital anesthesiologist tasked with Dr DeBakey’s case refused to take him on as a patient under the premise that first, the surgery had never been performed on someone Dr DeBakey’s age and as a result was too risky, and second, any surgical intervention would go against Dr DeBakey’s advanced directives.1

This case brings to light the moral dilemma that often faces anesthesiologists when they provide anesthesia to a patient with a DNR order. The role of the anesthesiologist during an operation is not just to make patients more comfortable and pain free; central to their function is the maintenance of circulatory stability.2 If a patient becomes hemodynamically unstable, it is the task of the anesthesiologist to restore cardiopulmonary circulation. In essence, providing cardiopulmonary resuscitation (CPR) is expected.2 It can be particularly difficult for physicians to do nothing when they know something can be done, and these situations are worse when the cause of an intraoperative cardiac arrest may be iatrogenic.2

Prior to the 1990s, DNR orders were routinely suspended during surgical procedures without explicit consent of the patient.2 The American Society of Anesthesiologists responded to criticism about this practice by putting forward a set of guidelines to promote more thorough communication between the anesthesiologist and the patient.3 Their goal was to make any changes to treatment-limiting directives a shared decision between the clinician and the patient.2 Further, in 1991, the Patient Self-Determination Act was passed to encourage patient autonomy, particularly with regard to end-of-life care.4

Despite these efforts, a Mayo Clinic study5 conducted in 2013 showed that one-third of physicians and 18% of anesthesiologists would automatically suspend a patient’s DNR order during anesthesia, under the premise that survival after cardiac arrest in the operating room is much higher than anywhere else.2,4,5 A more recent systematic review conducted in 2016 found that the probability of surviving CPR during the perioperative phase to the first 24 hours was 32% to 55.7%, with a 45.3% to 66.8% chance of a favorable neurologic outcome.2 Overall survival was 25%.2

In a review conducted by William Sumtall, MD, of the Department of Anesthesiology at the Ochner Clinic Foundation in New Orleans, Louisiana, and colleagues, Dr Sumtall argues that physicians should apply the 4 principles of medical ethics when discussing perioperative care: patient autonomy, nonmaleficence, beneficence, and distributive justice.4 Whereas every conversation should be approached with a concept that is dear to physicians’ hearts — first, do no harm — physicians must also recognize the patient’s right to self-determination — to make their own decisions about their care. Dr Sumtall and his colleagues argue for a “reevaluation [and discussion] of existing DNR orders prior to surgery and anesthesia.”4

However, these discussions do not eliminate ethical dilemmas for physicians, particularly anesthesiologists. In Dr DeBakey’s case, there is a clear refusal of care through his reluctance to be admitted to the hospital, his advanced directives, and by the documentation stating that he did not want to have surgery. Based on those elements of his case, the anesthesiologist who refused to proceed with surgery may not have been entirely unjustified in his actions.

On the other hand, suppose that those elements were not in place: Should the patient’s age have played such a significant role in the decision-making process? For the surgeon, Dr DeBakey’s age was the only thing standing in his way. There wasn’t much else to sway Dr Noon against surgery. On the other hand, the anesthesiologist felt that Dr DeBakey’s advanced age meant prohibitively high surgical risk for mortality. As Dr DeBakey’s family put it in an interview with the New York Times, the anesthesiologist did not want to go down in history as one of the doctors who killed Dr DeBakey.1

In the systematic review cited by Dr Sumtall and colleagues, elderly patients were in fact less likely to survive than younger patients and formed the lower end of the range cited.2 Do anesthesiologist concerns about age justify not performing a potentially lifesaving procedure when the only alternative is death?

In Dr DeBakey’s case, can the surgeon’s preference to operate — or not to operate — be separated from their 40-year friendship? Does the family’s preference to perform all possible lifesaving measures supersede the patient’s wishes? Does the patient’s retrospective approval of the intervention change whether the decision to operate was the right one at the time, given the information available to all those involved in his care? These are all excellent questions with no obviously clear answers.

Dr DeBakey’s family argued that his refusal for surgery wasn’t really a refusal but rather a preference. At the time of his admission, Dr DeBakey was still conscious and hoping for conservative management. When his condition deteriorated and he became unconscious, his only hope for survival was surgery. Circumstances had changed, and the family argued that under those new conditions, he would have wanted to undergo surgery.

Eventually, the case was transferred to the hospital ethics committee, who ruled in favor of surgery. Dr DeBakey underwent a 7-hour procedure to repair his aorta, complicated by tracheostomy, tube feeds, and renal failure requiring dialysis. He remained on mechanical ventilation for at least 6 weeks postoperatively. His postoperative period was further complicated by infections, hypotension, and cachexia. Yet despite all this, Dr DeBakey told his doctors that he was happy they had operated on him. “If they hadn’t done it, I’d be dead,” he told the New York Times.1

Going forward, there are 2 complicated questions that physicians must attempt to answer: How do we handle DNR orders during the perioperative period, and how do we approach end of life care in the elderly.

We all want to reassure our patients that everything will go well. However, we ought to always explain that unpredictable and bad things can happen — and when they do, we deserve an opportunity to fix them. It goes against our nature as physicians to let someone die due to something we did, regardless of how unintentional and unpredictable that might be. When explained in those terms, I have never had a patient not give me permission to suspend their DNR order temporarily for a procedure.

Advancements in medical technology have made patient age and its associated complications less of an issue. In my first year of fellowship, we were performing transcatheter valve replacements on 100-year-old patients who survived the procedure — patients who otherwise would have died. Age is no longer a limiting factor. Rather, we now perform assessments of baseline functional status, overall health, quality of life, and frailty.

If all conditions are favorable, then why should age matter? 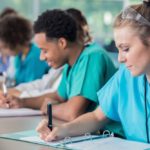