The LGBT community, also referred to as sexual minorities, represents a growing and medically underserved population in the United States.18 Lesbian and bisexual women are more likely to have poor physical and mental health, compared with heterosexual women, and they are less likely to use preventive health services. Gay and bisexual men are at higher risk for sexually transmitted diseases (STDs) and poor mental health, compared with heterosexual men.19-21

LGBT individuals also suffer incidents of violence against them more than the general population. LGBT youth are often involved in physical fighting, threatened or injured, and bullied on school property.25

A detailed sexual history is important in order to assess risk of health problems for LGBT patients. Primary care clinicians need to be sensitive to a patient’s potential discomfort in discussing sexual history, sex partners, or sexual practices. It is important to ensure confidentiality and not make assumptions about sexual orientation. 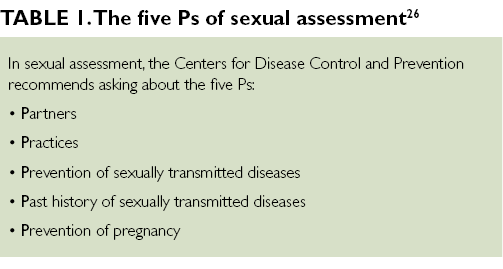 It is important for the primary care clinician to test MSM for HIV annually. A recent study from the CDC showed that 33% of MSM who did not know their HIV status had not been tested for HIV in the past 12 months.29 Patient education is vital to increasing the practice of preventive measures to protect MSM from contracting HIV (Table 3). Healthcare professionals should teach MSM the importance of practicing safe sex: using condoms and non–petroleum-based lubricants.29

Preventive primary care for MSM includes pre-exposure prophylaxis (PrEP), which is a prescription pill taken daily by those who do not have HIV but are at high risk for HIV infection. PrEP is particularly needed by patients whose partners are HIV positive. A postexposure strategy is also available that involves the use of antiretroviral medications (eg, tenofovir disoproxil fumarate and raltegravir). The medication is taken after an isolated incident of high-risk exposure (within 72 h and preferably within 24 h) in conjunction with HIV testing. Treatment is continued for 28 days.30 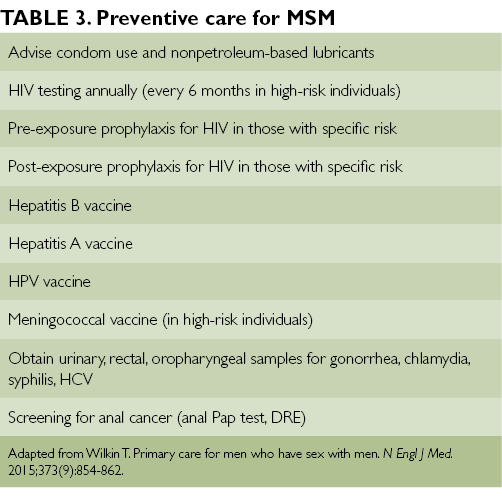 High-risk individuals should be tested for HIV and STDs every 6 months, and they should receive immunizations for the health problems associated with HIV. Testing should also be done periodically for tuberculosis, HPV, and hepatitis A, B, and C.31 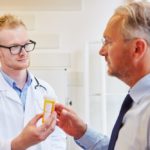