A recently published report describes the case of a 66-year-old male physician who developed iron deficiency anemia likely due to turmeric supplementation and highlights the importance of increasing awareness of this association.

The physician, who was experiencing an osteoarthritis flare following steroid therapy, began self-treating with turmeric extract capsules. He had a history of recurrent prostate cancer which was treated with radiation as well as 6 months of androgen depletion therapy.

Following his treatment, the patient experienced significant myopathy and reported a drop in his marathon times. After treatment with prednisone was initiated for possible bronchiolitis, the physician developed increasing muscle weakness. Prednisone was then tapered, however, the physician developed substantial tendinitis, arthritis, as well as a small left knee effusion.

Rheumatologic workup was negative, however an increased sedimentation rate was observed (from 8 to 29). “To combat the near-crippling inflammation and arthritis, he began the intake of turmeric extract on September 13, 2018, with about six 538mg turmeric extract capsules a day,” the report stated. Turmeric doses of ≤12g/day are reported to be safe and well-tolerated.

The physician discontinued the turmeric supplement after reviewing the literature on turmeric-related iron deficiency. “Within 2 weeks, his iron, ferritin, and hemoglobin were rising while taking the same iron supplement, with no changes in his medical regimen. His tendinitis and arthritis mildly worsened and then stabilized, and his lung function improved,” the report stated.

The authors noted that to their knowledge this may be the first documented case of iron deficiency anemia due to the inhibition of iron absorption by  turmeric. Because supplementation with turmeric is not only widespread but is also becoming increasingly common, it is important for providers to be aware of this association and question patients about supplement use following an iron deficiency diagnosis. 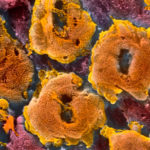