CGM is the most objective method to assess dynamic glucose in daily life, but standard CGM metrics do not provide dynamic information on changes in glucose levels. Based on findings that standard CGM metrics also did not detect differences in glucose control in different neonatal outcomes in pregnant women with type 1 diabetes, it has been suggested that these standard metrics likely miss temporal glucose profiles variations.

Applying functional data analysis to CGM data, however, may provide valuable information on differences in temporal glucose control. The goals of the current study were to perform functional data analysis on CGM data obtained in the Continuous Glucose Monitoring in Pregnant Women With Type 1 Diabetes (CONCEPTT) trial and assess whether there were differences in 24-hour glucose profiles between women randomly assigned to real-time CGM vs self-monitored blood glucose (SMBG), women who used insulin pumps vs multiple daily injections, and women whose infants were born large for gestational age (LGA) vs not LGA.

Overall, CGM and neonatal outcome data were available from 200 women in the pregnant group of the CONCEPTT trial, including 100 in the CGM group and 100 in the SMBG group.

Applying functional data analysis to CGM data showed that women who used real-time CGM had a significantly lower glucose level by 7 to 14 mg/dL for 7 hours during the daytime (8:00 AM to 12:00 PM and 4:00 PM to 7:00 PM). There were no significant differences in overnight glucose levels.

At 24 weeks’ gestation, standard CGM metrics showed that mean glucose levels and time spent above glucose target were significantly higher in women who used insulin pumps compared with those who used multiple daily injections. Functional data analysis revealed that women who used pumps had significantly higher glucose levels (7-16 mg/dL) for 12 h/d (3:00 AM to 6:00 AM, 1:00 PM to 6:00 PM, and 8:30 PM to 12:30 AM) at 24 weeks, but there was no difference at 34 weeks’ gestation. These differences were predominantly seen during the daytime hours.

“[Functional data analysis] of CGM glucose profiles gives important information about differences in glucose control, which is largely undetectable by standard CGM metrics, including detail on the timing and duration of these differences,” concluded the researchers. They indicated that consistent reviews of ambulatory glucose profiles during pregnancy, which are more suited to the individual level for this type of data analysis, “would enable a focus on meal choices, together with a more aggressive approach to bringing forward insulin bolus timing and increasing insulin doses especially mid pregnancy, aiming for small, but sustained, improvements in daytime glucose levels.” 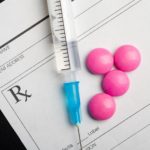