Individuals with diabetes are at an increased risk for acute mesenteric ischemia, according to study results published in Atherosclerosis.

The relationship between diabetes and intestinal vascular events remains uncharacterized. Researchers aimed to determine whether diabetes is associated with an increased risk for acute mesenteric ischemia in a population-based cohort study in Taiwan.

Patient data were obtained from the National Health Insurance Research Database for 66,624 individuals (47.83% women) with diabetes, as well as for a randomly selected 4:1 matched cohort without diabetes (n=266,496). The cumulative incidence of acute mesenteric ischemia was higher in the diabetes cohort than the comparison cohort (P <.001). In the group with diabetes, the incidence rate of acute mesenteric ischemia per 1000 person-years was 0.56 compared with 0.29 in the comparison cohort (adjusted hazard ratio [aHR], 1.32; 95% CI, 1.11-1.56; P =.001).

The researchers noted that data regarding potential confounding factors, including body mass index, smoking history, and family history, were not available from the database in Taiwan and could not be accounted for in their analysis. In addition, the relationship between glycemic control status and acute mesenteric ischemia risk could not be explored. 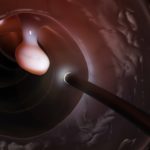