HealthDay News — According to a study published in the Journal of the American College of Cardiology, QT interval-prolonging drug-drug interactions (QT-DDIs) can be identified with data mining coupled with laboratory experiments.

These interactions were either refuted or corroborated using 1.6 million electro-cardiogram results from 380,000 patients in an institutional electronic health record (EHR).

The researchers identified evidence from direct and indirect signals in the adverse event reports that the combination of ceftriaxone and lansoprazole would prolong the QT interval. Patients taking both ceftriaxone and lansoprazole had significantly longer QTc intervals as seen in the EHR, and were 1.4 times more likely to have a QTc interval >500 ms.

These drugs blocked the human ether-à-go-go-related gene channel in the laboratory. Use of the combination of lansoprazole and cefuroxime as a negative control exhibited no significant effect in the EHR or electrophysiology experiments. This interaction was specific to lansoprazole combined with ceftriaxone in class effect analyses.

“Coupling data mining and laboratory experiments is an efficient method for identifying QT-DDIs,” the authors write. “Combination therapy of ceftriaxone and lansoprazole is associated with increased risk of acquired long QT syndrome.” 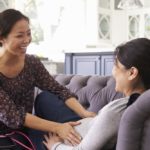 Home Births: Responding to a Cultural Shift in Medicine