Lower wealth increases the risk for death and disability in adults older than 54 in both the United States and England, according to a study published in JAMA Internal Medicine.

Lena K. Makaroun, MD, of the Veteran’s Administration Puget Sound Health Care System and the division of gerontology and geriatric medicine, University of Washington, Seattle, and colleagues also observed that access to health care may not reduce wealth-associated disparities in older adults.

The investigators used data from the US Health and Retirement Study (HRS) and English Longitudinal Study of Aging (ELSA), examining 12,173 participants enrolled in HRS and 7599 enrolled in ELSA in 2002. Participants were followed until 2012 for mortality and disability.

The subjects were stratified by age — 54 to 64 vs 66 to 76 — because safety-net programs often begin around age 65. Wealth was used rather than income to better capture financial resources in a population more likely to be retired, and participants were stratified into 5 wealth quintiles (Q1-Q5) based on total net worth in 2002.

In both the United States and England, older respondents in the lowest wealth quintile (Q1) had a 2-fold increased hazard of developing difficulty with activities of daily living (ADL) compared with respondents in the highest wealth quintile (Q5). In addition, in both countries, the largest gap in death and disability in the older cohort occurred between Q1 and Q2, with less difference found between Q4 and Q5.

Based on this evidence, the researchers noted that relatively small increases in wealth contribute to substantial gains in life expectancy and function. They further argue that the failure to find evidence that providing state-sponsored health insurance either from birth, as in England, or later in life, as in the United States, suggests that other interventions are necessary to reduce disparities.

Study limitations include the lack of follow-up data or baseline ADL difficulty data in more than a quarter of participants, differences in the two study populations, and the fact that some safety net programs come into effect at ages other than 65. 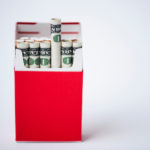