According to the Advisory Committee on Immunization Practices, a panel of US health officials that makes recommendations to the CDC regarding which vaccines people should get, children between the ages of 2 and 8 years should use the nasal spray over the shot when it comes to the flu vaccine. Studies show that kids within that age group are about half as likely to get the flu after a squirt in the nose rather than a shot in the arm.

Currently, AstraZeneca’s FluMist is the only flu vaccine on the market in the form of a nasal spray. Unlike flu shots, which are made from a killed flu virus, the nasal spray is made from a live, but weakened virus. Although there is no clear difference in adults, studies have shown that the spray can provide a stronger immune response in children who have not had the flu before.

A representative for the American Academy of Pediatrics, the nation’s largest pediatricians’ group, however, thinks that one vaccine shouldn’t be given preference for kids, noting that doctors have already ordered their vaccine doses for the upcoming flu season. If the recommendation is approved, most pediatricians won’t be able to follow the advice until next year. FluMist is also more expensive than a typical flu shot. FluMist costs about $23, whereas shots range from about $8 to $22.

Other health officials also stressed that either vaccine is perfectly fine. “Some kids can’t take the mist, namely those with compromised immune systems and kids with asthma, who could have a respiratory response,” Marc Siegel, an associate professor of medicine at NYU Langone Medical Center in New York City said. He adds, “So when in doubt, get the shot.”

Whereas health experts may be divided when it comes to the spray versus the shot, they do agree that every child should be immunized. If the spray is not available, parents shouldn’t pass up an opportunity for their children to get the shot. According to the CDC, October is the best time to get a flu vaccine. 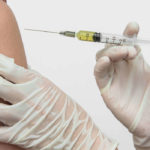