Cannabis may be an effective and fast-acting treatment for patients with nausea, according to a study in the Journal of Clinical Gastroenterology.

Researchers used the largest US database of real-time cannabis self-administration sessions, collected by the Releaf App, to measure cannabis consumption and its effects on nausea. Participants’ symptom changes were evaluated 5 to 60 minutes after consumption. The sample included 2220 sessions completed by 886 users from June 6, 2016, to July 8, 2019.

Participants’ recorded symptom intensity levels began to decline immediately after cannabis consumption, with average intensity levels decreasing to 4.49 after 5 minutes, 3.55 after 15 minutes, 2.69 after 30 minutes, and 1.99 after 1 hour.

Concentrates and flower products provided faster and greater symptom relief vs edible or tincture cannabis products. Vaporizer use was generally associated with significantly less symptom relief compared with a joint or a pipe.

The main study limitation was the use of observational data, which did not include randomization, standardized dosing, or placebo comparison. The data also did not include individuals who do not use cannabis to treat their nausea or users who did not use the app to track their consumption, which may have resulted in selection bias.

“Cannabis may be a highly promising tool for treating nausea, especially treatment-resistant nausea in low-risk patient populations or in acute contexts when immediate relief is required,” the investigators noted.

“The effectiveness of cannabis for treating nausea is not without caveat, as it may induce individuals at high risk of adverse consequences to consume cannabis as well, for example, pregnant women, children, or individuals with a history of substance [use] or cannabinoid hyperemesis syndrome,” the study authors added. “The lack of research on longer-term effects relative to those of other antiemetics and the potential for dependence also suggest clinicians should regularly monitor their medical cannabis patients through the duration of treatment.” 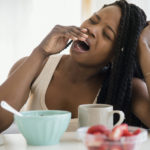 Narcolepsy, Sodium Intake, and Heart Health: This Expert Explains It All