Medicine is often about the human interaction that occurs between the physician and the patient. It is in that interaction that physicians are able to gain the trust that allows their patients to discuss the information that is needed to make accurate diagnoses. And it is in that very same relationship that we are able to engage our patients to follow treatment plans that ultimately result in their improved health and quality of life, even if the initial therapy does not work out as planned. Thus, it allows us to build the trusting relationships that allow us to be imperfect, as we all are, in our pursuit of successful therapeutic answers for our patients.

Unlike other relationships, the physician-patient relationship is often forged in the setting of major life events such as births, severe illnesses, and death. As a result, some relationships tend to develop rapidly over short periods of time. For example, the first patient of mine who passed away did so during 1 of my first 30-hour shifts as an intern.

I got called down to the emergency department to admit her to the medical intensive care unit (MICU) for fever, tachycardia, and hypotension; she was in septic shock. She had previously been admitted to a nearby hospital for 2 weeks for diabetic complications and sepsis. Despite being discharged only a few days before, her family reported she had never improved and appeared to be getting worse.

When I went down to examine her, we found a central line buried within a large neck abscess from the prior admission. I spent hours talking to her and her family and immediately began to form bonds with them. By explaining to them what was going on and how we planned to treat her, I was able to build their trust and confidence. In return, they shared some startling and helpful information about her prior hospital admission that helped guide her therapy more appropriately.

When things deteriorated later that morning, I kept the family informed. When she finally passed away, despite our best efforts, I was devastated. To make matters worse, my ignorance on dealing with such matters led me to believe that I would be met with anger and hostility. Instead, I found compassion and appreciation for the care I had provided her. In a matter of hours, I had gone from being a complete stranger to this family to sharing one of their most painful and tragic moments.

Luckily, not all relationships end so tragically. As physicians, we have the unique opportunity to develop bonds with our patients over years, and in some cases, even decades. It is ironic, then, that I often see my trainees and colleagues describing patients by their disease. The key to a successful physician-patient relationship, in my opinion, is to recognize that the patient is not the disease being treated. They are human beings who often need us to listen and understand how the disease they are battling affects their day-to-day lives.1 They need us to care about what happens to them. Most of all, patients need us to show empathy toward their plight.

Despite the shift in focus to patient-centered care by nearly all US medical schools, the ever-changing landscape of healthcare threatens our ability to listen well. Newer healthcare models aiming to control costs and make the delivery of care more efficient have also introduced varying organizational and financial scenarios that are often difficult for patients to navigate.2 Changes in how we document, how we bill, and the ever-growing financial and administrative burdens of this brave new world of medicine no doubt impede our ability to successfully build trusting relationships.3 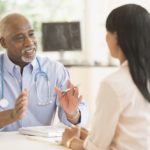