Leana Wen, MD, MSc, is slated to serve as the sixth president of the Planned Parenthood Federation of America. According to a Planned Parenthood press release, this is the first time in nearly 50 years that a physician will lead the organization.1

Currently, Dr Wen is the Commissioner of Health for Baltimore, MD, the oldest continuously-operated health department in the United States.

According to an article published in Slate, Dr Wen’s family left China as political asylees, then lived “in poverty in Compton, California, relying on Medicaid and Planned Parenthood for health care.”2 Dr Wen received training from Washington University School of Medicine in St. Louis and Brigham and Women’s Hospital/Massachusetts General Hospital in Boston. She also studied public policy and economic history at the University of Oxford.

“As a patient, I depended on Planned Parenthood for medical care at various times in my own life, and as a health leader, I have seen firsthand the lifesaving work it does for our most vulnerable communities,” said Dr Wen.1 “I will ensure we continue to provide high-quality care, including the full range of reproductive care, and will fight with everything I have to protect the access of millions of patients who rely on Planned Parenthood.”

“[Dr Wen] is passionate about balancing public advocacy for reproductive freedom with the daily provision of quality health care,” Ms Quindlen said. “Like so many of our patients, she is an immigrant determined to do the best for this country. As she likes to say, her whole life has been leading to this position.”1

Dr Wen has worked tirelessly to protect Baltimore’s women and families from harmful Trump Administration policies. She also worked to organize “thousands of doctors and health professionals against President Trump’s proposed domestic gag rule,” arguing that it “fundamentally alters the doctor-patient relationship” and was poised to harm care for thousands of women.1

Dr Wen begins her work at Planned Parenthood on November 12, 2018. 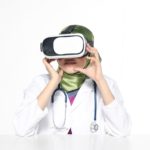 The Gamification of Medical School is Well Underway