Walter Elias Disney was born on December 6, 1901 in Chicago, Illinois. He was an American entrepreneur who became an enormously successful animator, motion picture and television producer, and the creator of the original Disneyland, and he conceptualized Walt Disney World. Though born in Chicago, his early childhood was spent in Marceline, Missouri and then Kansas City. He began drawing at a very young age, and was an avid train enthusiast. Disney attended McKinley High School in Chicago and took art classes at the Chicago Art Institute. At age 16, he dropped out of school to join the army but was rejected for being underage. Not deterred, he joined the Red Cross and shipped out to France for a year, where he drove an ambulance. He returned from France, going back to Kansas City and deciding to pursue a career as an artist. Disney began screening his cartoons at local theaters, calling them Laugh-O-Grams, and they quickly became successful. He moved to Hollywood and developed a character he originally called Mortimer Mouse. His wife, Lillian, an ink artist, thought that the name wasn’t quite right and suggested Mickey Mouse instead. The first sound production featuring Mickey Mouse was Steamboat Willie, and it was a sensation! From there, many more cartoon characters followed, then feature-length animated films and the Disneyland theme park in California.

Disney lived in a different time, and his life reads as an adventure, but some controversy lingered around the business mogul. Reports surfaced with accusations that he was an anti-Semite and a Nazi sympathizer, and there were also allegations of racism. For the most part, it appears these rumors were founded on subjective material, and that he didn’t really have any strong political or racial views, except for being extremely anti-Communist and believing there was a growing Communist conspiracy in the US that was embedded in Hollywood. He was called in and testified as a friendly witness in front of the House Un-American Activities Committee in 1947 during the Red Scare, and named animators whom he suspected of being Communists.

A little-known fact about Disney was his chain-smoking habit, as he never allowed himself to be photographed with a cigarette and never smoked around children. Disney had been feeling ill for many months before he entered St. Joseph Hospital in California on November 2, 1966. His original complaint was pain in his leg and neck. Doctors discovered a spot on the X-ray of his left lung. The planning and construction for Walt Disney World in Florida had already begun when he was diagnosed with lung cancer. Disney died on December 16, 1966 at the age of 65. The Florida theme park was completed as planned and opened in 1971.

The story here isn’t so much a “What Killed ‘Em” but rather an “Is He Forever Dead”? While Frozen is an animated Disney film about 2 princesses in an icy land, the words “frozen” and “Disney” used together have another connotation. It’s been talked about, written about, speculated upon, and contemplated: that Walt Disney was an advocate of cryonics and has been in a state of suspended animation since his death, with the hope that medical technology advances would allow for his illness to be cured and for him to be resurrected. One of the longest-running rumors persists that Disney had his body cryogenically frozen and it is being held in storage under the Pirates of the Caribbean ride at Disneyland. Why the Pirates of the Caribbean ride? At least one publication in the 1960s reported that the rumors were started by Disney Studio animators with a strange sense of humor.

The Disney family has long contended that Walt Disney’s body was cremated and his ashes were interred at Forest Lawn Cemetery in Glendale, California. However, it’s easily understandable as to why people would believe that Disney is frozen, given the fact that he was an extraordinary visionary, he had the financial means to pull it off, and the technology was available at the time of his death. Coincidentally, the first case of cryonic preservation in the US was James Hiram Bedford (April 20, 1893-January 12, 1967), which occurred a month after Disney’s death, also in California. Bedford was a University of California psychology professor who died of advanced lung and kidney cancer. This may have helped fuel the Disney rumor mill. Biographies written about Walt Disney imply cryonics was likely used to preserve his body. This is an urban legend that will undoubtedly endure as long as Mickey Mouse has allure.

One more strange Walt Disney fact thrown in for good measure: Disney’s last words (written not spoken) were “Kurt Russell,” who was a young actor with the studio at the time. No one knows why or what Disney was trying to say, including the actor. Perhaps if he is unfrozen and brought back to life, he can clear that one up for all of us. 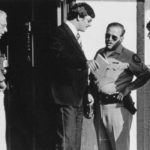