Stephen Rockower is an orthopedic surgeon in suburban Rockville, Maryland. He’d built his own practice for more than a decade with a partner, and things were busy and going well. Then, in March 2020, the COVID-19 pandemic shuttered many cities, including his own. Residents in his area began delaying care, not wanting to expose themselves to medical environments. “Our office practice and surgical practice basically went to zero,” he says.

His office pivoted to telemedicine, and some people came for in-person visits, but Rockower went from 40 patients a day to two. “It was terrible,” he says. Rockower was 69 at the time. He had built a practice from the ground up and knew it was hard work. The longtime surgeon also knew he’d have to do it again once the pandemic waned. Before long, he realized: “I don’t have it in me.”

In August 2020, Rockower retired. His partner kept the business going for another few months but ultimately closed it in December 2020.

Rockower is one of many doctors who decided it was time to leave medicine during the pandemic. One international survey conducted in the summer of 2020 suggested as many as 11% of U.S. doctors were considering leaving medicine, while 25% were thinking of early retirement. In a survey of 3,513 U.S. physicians, Physicians Foundation found that 8% of doctors have closed their practice as a result of the pandemic, and 59% believe the pandemic will lead to fewer independent physicians in their communities.

Fewer independent physicians will mean less access to care in rural and other underserved areas, according to Robert Seligson, the CEO of Physicians Foundation. And losing physicians to early retirement is bad for medicine as a whole. Doctors, like any other professionals, become more innovative and proficient every year they practice and pass that knowledge and experience on to younger doctors, he says. But when doctors leave medicine years earlier than they otherwise would, that chain of expertise evaporates. “That’s the part that hurts, in my opinion, the continuity of care,” he says.

Some doctors leaving medicine are well under the retirement age, including several who were profiled by The New York Times. Women doctors, in particular, left for financial reasons as well as family obligations. Even before the pandemic, women doctors reported feeling belittled and discriminated against. “When you aren’t respected by your colleagues and you’re not respected by your patients and not respected by the nurses, it kind of makes it tough to get up and go to work every day,” one cardiologist told Dame Magazine.

Burnout was lower in 2020 than in previous years on the whole, according to the Medscape National Physician Burnout & Suicide Report 2020. Just 42% of physicians felt burned out last year, versus 46% in 2015. But who felt the most burned-out also changed—in 2019, urologists ranked highest in burnout; in 2020, it was critical care physicians. Nearly 50% of physicians said they would take less money—between $10,000 and $50,000 less a year—in exchange for more free time.

“The public doesn’t really understand what medical people do behind the doors of a hospital,” Rockower says. “But you’ve gotta keep swinging. I don’t know what else you can do.”

Being near retirement age doesn’t make the choice to leave medicine easy. Michael Peck is an anesthesiologist who, at 65, was trying to figure out if he could afford to retire and when. Medicine had become exhausting, Peck says. The 24-hour shifts were tough as he got older, as were the endless battles with insurance companies over payment. “Then you throw in this ridiculous thing called a pandemic,” he says.

The moment he decided to quit was in April 2020. After a 12-hour shift explaining to patients that they were very ill and would likely need to be ventilated, he had to remove the layers of his ventilator hood, surgical gown, N95 mask, and double gloves. There was no guidance around the hospital, and he couldn’t locate one of the nurses who was supposed to be trained for the correct PPE removal steps.

When he went home, he realized he didn’t want to do it anymore. He asked his financial advisor if he could afford to retire. His advisor said yes, though retirement wouldn’t be extravagant. It required a strict budget, and Peck has taken on work as a chief medical officer at a startup as well as launched his own company. “Now I have different stresses. How many Zoom calls do I have today?” he says. “But I don’t have to worry about anybody dying on me.”

Taking care of patients is an honor, he says, but he hasn’t regretted the change. “Do I maybe want to be able to enjoy those last 20 years I have left? You betcha.”

Retirement has been good for Rockower, too. He misses taking care of patients and is pursuing opportunities to do charity work through his county, and he’s still active in national and local medical societies. He’s a docent at the Smithsonian National Museum of Natural History, giving virtual tours of the fossil hall. And his pandemic puppy, Rosie, keeps him active.

“I’m not super resentful. I would have liked to be able to do more stuff for a longer period of time,” he says. “[But] dealing with the aggravations of running a practice, I don’t miss that at all.” 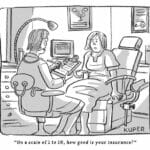