A segment of our society recently celebrated April 20th (or 4/20), what marijuana enthusiasts consider to be a high holiday. Nowadays, this informal holiday garners national attention and is celebrated coast to coast with large gatherings in many cities. The term 420 is a code word for marijuana. It also is a way to express your acceptance of smoking marijuana or to identify someone else who smokes dope, or it can refer to the actual act of smoking marijuana. The term “420-friendly” appears often in personal ads on social dating sites. Another example: “Is this party 420 friendly?”

High Times magazine, the original pot enthusiast’s bible that has been in publication since 1974, has offered the official explanation of 420. Staff members claim they were provided with verified 420-related documents and posters that prove the actual origin of the term.

According to High Times, the term 420 was coined sometime in the 1970s by a group of students who called themselves the “Waldos” at San Rafael High School, in San Rafael, California. They came up with the term because they would all meet at 4:20 pm to smoke joints. The code word enabled the guys to openly talk about marijuana without anyone outside their circle knowing.

420 began to become popular outside the Waldos in the late 1980s, when it was being bantered about by fans of the Grateful Dead, whose fan club headquarters was in San Rafael. Then, when High Times magazine started using 420 in articles in the late 1990s, it became popular among the magazine’s growing readership. Eventually, the term 420 seeped into popular culture. Marijuana’s major advocate organization, the National Organization for the Reform of Marijuana Laws (NORML), usually hosts its annual convention on April 20.

If you’ve heard any other reasons why the code name 420 came into being, we’d love to hear from you! 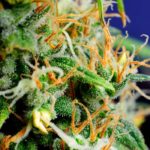