A new game is reportedly becoming popular with America’s youth, but it’s not the innocent child’s play one might expect. It’s called the “knockout game” and involves a teenager, or a group of teens, sneaking up on an unsuspecting victim with the intent of knocking the victim unconscious with a single blow to the head. The violent act is carried out simply for the thrill of it and is often captured on video and uploaded to social media Web sites such as YouTube and Facebook. Even worse, the victims are usually defenseless against their attackers, who target women and the elderly. Injuries and even death have been attributed to the terrifying game. When did this deplorable game start? More importantly, is the knockout game real or just a new name for crime that was always there?

The concept of the knockout game is nothing new, with reports that go as far back as 1992 when a Norwegian undergraduate student at the Massachusetts Institute of Technology was randomly attacked by 3 teenagers. The student, 21-year-old Yngve Raustein, was sucker-punched in the face and fatally stabbed in the heart. One of the assailants later confessed that he stabbed Raustein “just to see what it was like to watch somebody die.” Media outlets reported that the attack was a result of the knockout game. In the ’80s, the game was called “one-hitter-quitter” and the objective was to pick a person at random and attempt to knock them out. Former players have said they participated in the game for fun, while others believe the game was played as a display of manhood and to earn respect.

After the 1992 murder, reports of the game didn’t reemerge until 2011 when a 72-year-old immigrant from Vietnam died following an attack. Hoan Nguyen was walking down the street in St. Louis with his wife when a passing teenager struck him in the face. Local teens in the area later confessed to playing the knockout game and said that it was popular in the community. Since then, the game has gained momentum across the nation and new stories of teenagers playing have popped up more frequently, including nonfatal attacks. Incidents of the game have been reported in Massachusetts, New York, New Jersey, Pennsylvania, Illinois, Missouri, California, and the District of Columbia.

What is causing this surge of random violence among teenagers? Perhaps it’s the reward of attention, albeit negative, given to them by the media for their crimes. Youth violence expert Chuck Williams believes today’s youth are desperate for attention. “These kids know the consequences,” says Williams, a professor of psychology and education at Drexel University in Philadelphia. “They want to get arrested. They want to get caught, because they want that notoriety. They know they won’t go away forever because they’re kids. It’s a win-win all around for them.” Others say the game is racially motivated. In the majority of the reports, the assailants are described as young African American men and the victims as Caucasian.

There is also the belief that the knockout game epidemic is actually a myth and not an epidemic at all. While there’s no denying that the game exists and has been played for years, the media’s portrayal of the game reaching epidemic status might not be entirely accurate. There is no solid evidence that the knockout game is spreading or that it’s racially motivated besides a few YouTube videos and news reports. According to the New York Times, police officials are not quite sure what to think about the phenomenon or whether or not the recent attacks are nothing more than random violence that always has occurred. If anything, officials are worried that the recent news reports will lead to copycats emulating the behavior they see and read in the media.

Whether or not the knockout game is real or just a myth, the unfortunate fact is that random violence certainly exists among today’s youth who are looking for another cheap thrill. People who seem distracted, such as those checking text messages or listening to music while walking, are more vulnerable to an attack. Always remain aware of your surroundings and never feel embarrassed to ask a friend or co-worker to escort you to your car if you feel unsafe. 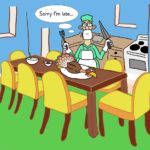 It’s Just Turkey to Me