The first account of a woman getting “paid” for dancing erotically can be traced back to the Bible, where some interpreters tell us that the daughter of the Jewish Princess Herodias seductively performed the Dance of the Seven Veils to please King Herod during his birthday celebration. Herod was so impressed with (and probably so aroused by) the dance that he granted the daughter anything she desired. Obeying a request from her mother, Herodias’s daughter reportedly replied: “Give me here upon a platter the head of John the Baptist.” That’s a pretty steep price that pious John had to pay for King Herod’s viewing pleasure.

What’s in a name?

Commonly referred to as strippers or go-go girls, women who do it for a living prefer to be called “exotic dancers.” The establishments they work in are commonly called strip clubs but their proprietors prefer to call their businesses “gentlemen’s clubs.” Bottom line is that women in this industry get paid to sexually titillate men by dancing suggestively in as little clothing as possible without getting arrested, and in locations where laws allow, they dance totally nude. Regardless of the nomenclature, the field of stripping is dominated by women. Male strippers (think Chippendales) make up less than a third of the professional community.

But let’s take a step back (way back) and look at the very beginnings of this sensual subculture. The earliest evidence of exotic dancing can be traced to Paleolithic cave paintings in the south of France, more than 20,000 years ago. Archeologists have uncovered miniature statuettes of exotic dancers near the Black Sea regions of Bulgaria and Romania that date back to the New Stone Age, or Neolithic Era, and are estimated to be over 9000 years old.

Dancing designed to sexually stimulate is thought to have begun as an ancient ritual to gain the favor of the goddesses of fertility and motherhood in hopes of successful reproduction as well as to increase the fertility of crops. Draped in animal fur, women who performed these dances would pose erotically as the furs were slowly removed to reveal the dancer’s naked gyrating body.

Getting Paid for Your Efforts

In the 18th century, sensuality and eroticism reigned supreme throughout Europe, compliments of the ladies of the court, who were paid to erotically entertain the menfolk as they dined during celebrations and banquets. These female courtesans popularized the fan as a sensual prop, which they used to accent their titillating dance moves to make them look mysterious.

Fast forward to more modern times, where erotic dancing blossomed in Britain in the late 1800s with the rise of British burlesque houses. Lydia Thompson, an English dancer, comedian, actress, and theatrical producer, became one of the most famous burlesque dancers on the London stage. Originally, burlesque performances incorporated a complete act with a combination of music, singing, humor, dance, and theatrics, and sexual parody; women undressing themselves in a sensual manner were only part of the show. Lydia is credited with bringing burlesque to America in 1868 with her troupe of “British Blondes” performing in New York City theaters. Lydia’s performances involved chorus lines of beautiful, scantily clad women and sometimes involved audience intimacy without contact. No doubt, the burlesque industry quickly discovered that the main attraction was sex. Over time, burlesque shows began focusing mainly on suggestive sexual dances, and routines turned raunchy. Women became more uninhibited and the acts became more risqué. Of course, the church preached against these types of performances, but they only grew in popularity.

The early roots of modern stripping first appeared in the late 1800s when a new form of erotic dancing evolved into a dance known as the striptease. It was a gradual, soft, sensual way to undress in order to arouse. As the name suggests, women slowly undressed themselves, layer by layer, to titillate and tease in a blatant sexually suggestive manner as they revealed more and more of their flesh, down to pasties and a G-string covering up the essentials. Drooling men howled in appreciation as each piece of clothing hit the floor, leading the men to create and shout out the striptease catch phrase: “Take it off… take it all off!”

The 1920s saw a new twist to the striptease with the addition of pole dancing. Pole dancing originated at the height of our country’s Depression. At the time, traveling fairs trekked from town to town to entertain with many different types of side shows, which were held in tents. In one of the side tents, women would striptease on a small stage in front of cheering men. The ladies incorporated the tent pole into their striptease routine, climbing to the top of the pole, grabbing the pole and swirling around it, and grinding and gyrating against it. The tent pole became known as the “dance pole.”

In the 1950s, pole dancing graduated from tents to bars that catered to this form of entertainment. The elaborate, intriguing costumes strippers wore during their performances became part of the act. Stripping was slowly seeping into the American sex industry and becoming a staple.

Strip clubs were frequently raided and shut down for clashing with decency laws, but similar to what occurred with alcohol during Prohibition, the government and religious institutions just couldn’t stop the onslaught of their popularity with American men. Editorials and sermons had no chance of influencing where many men chose to spend their recreational time. As a result, this era saw the enacting of new zoning laws and restrictions on the limits that female dancers could interact with their customers in order to regulate the strip club industry.

The 1960s and 1970s saw a steep rise in the number of strip clubs as society was going through a sexual revolution and becoming more accepting of displayed sexuality, and the strip club survived despite public protest and strict city regulations.

During the 1970s and 1980s, almost all strip clubs incorporated poles onstage to accommodate pole dancing, as this practice became popular among strippers. Another addition to the art form was big boobs! Breast enlargement surgery became enormously popular with women in the business as big breasts became synonymous with strippers.

The infamous lap dance (contact dancing) started out in Montreal in the early 1990s. Lap dancing eventually migrated to the United States and was made legal in this country in 1999. Also in the late 1990s, pole dancing techniques used by strippers were turned into a legitimate form of exercise for women with the introduction of pole fitness. The first instructional pole fitness and dance DVDs emerged and even a National Pole Dancing Championship was created.

Nowadays, in most strip clubs, the women wear skimpy bikinis or G-strings that leave little to the imagination. There’s rarely a striptease show, just pole work. Ladies move about on stage as guys gawk at their nearly naked bodies. Some strippers will bump and grind against one another onstage to the enjoyment of their male audiences as the pounding beat of loud rap music intoxicates the room. From ancient ritual to modern-day entertainment for men who typically watch with a stiff drink in hand, stripping has come a long way, baby!

Stay tuned for The History of Stripping: Part II: Male Strippers Get Into the Act 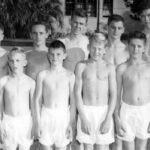