“Climate change, once considered an issue for a distant future, has moved firmly into the present,” opens the 840-page National Climate Assessment that the U.S. Global Change Research Program released on May 5, 2014. The report, assembled by more than 300 experts over 4 years, warns of the damaging effects of global warming that the United States needs to prepare for and respond to. It also states clearly that human activity is to blame.

Before we get into the details of the report, it’s important to understand what global warming actually is. Global warming, or more appropriately named climate change, results from the gradual increase of the earth’s average temperature attributed to carbon dioxide (CO2) and other air pollution collecting in the atmosphere and trapping the sun’s heat. This process is called the greenhouse effect, and whereas the greenhouse effect has been historically necessary for human survival, the trapping of too much heat can have dire consequences. CO2 is the most substantial greenhouse gas, and for much of the past, its levels have been balanced mainly by the activity of plant life. However, humans produce tens of billions of tons of CO2 annually by our consumption of fossil fuels to generate electricity, for transportation, and in industry, which gets pumped into the atmosphere and results in a warming climate.

The latest report on climate change released by the U.S. Global Change Research Program adamantly emphasizes that human activity is the main driving force of climate change. Scientists and engineers from around the world collected evidence using satellites, weather balloons, weather stations, and other types of observation systems that monitor earth’s weather and climate. The report states that temperatures in the troposphere and in the oceans, as well as atmospheric water vapor and sea levels, have all increased in recent decades. The following graph shows the annual average global temperature since 1880. The blue bars indicate temperatures below the long-term average and the red bars indicate the temperatures above the long-term average. The black line shows atmospheric CO2 concentration in parts per million (ppm).

The average global temperature is directly correlated to atmospheric CO2 concentration. According to the report, “the majority of the warming at the global scale over the past 50 years can only be explained by the effects of human influences, especially the emissions from burning fossil fuels (coal, oil, and natural gas) and from deforestation.” The assessment further attributes the warming to human activity after differentiating the human and natural factors that influence climate in the models. Only when the human influences are included do the models reproduce the warming shown over the past 50 years.

What This Means for Our Future

The projected extent of global warming depends on the amount of emissions; however, a 0.5°F increase in average global temperature would still be expected over the next few decades, even if all emissions from human activity ceased today, says the report. Notably decreased future warming will result from reduced emissions beyond mid-century, and conversely, higher emissions will result in more warming and more severe impact on the environment and human society.

The above graphs show the projected rise in global average temperature based on different scenarios of future emissions produced by human activities up to the year 2100. In all cases, temperatures are expected to rise, but the extent varies. The left graph shows the 2 main scenarios used in the report (SRES=Special Report on Emissions Scenarios). A2 projects a scenario where emissions continually increase throughout the century, and B1 shows a slower increase in emissions beginning now, with significant emissions reductions by 2050. The right graph shows newer analyses based on the most recent generation of climate models that consider climate policies that would result in emissions reductions, which the SRES set did not. RCP 2.6 assumes immediate and rapid reductions in emissions and RCP 8.5 shows a continuation of the current path of global emissions increases.

According to the report, climate change is expected to have devastating effects on earth and its inhabitants. Weather is already becoming more extreme, with climate change possibly playing a part in events such as the recent super-storm Sandy, which hit the Northeast in 2012. More precipitation is projected for the northern US and less for the Southwest over the course of this century. In other words, wet areas will get wetter and dry areas will get drier. Heat waves, hurricanes, and snowstorms will become more intense and frequent. The global sea level has risen by about 8 inches since reliable record keeping began in 1880, and it is projected to rise another 1 to 4 feet by 2100. The ice caps are expected to melt further and the Arctic Ocean is predicted to become ice-free in summers by mid-century. Marine ecosystems will be altered due to the oceans’ absorption of a quarter of the CO2 emitted, and they will become more acidic as a result.

The report states that the changing climate can affect humans around the world, with children, the elderly, the sick, and the poor being especially vulnerable. Human health and well-being will be threatened because of extreme weather events and wildfires, decreased air quality, and diseases transmitted by insects, food, and water. Infrastructure will be weakened due to the rise in sea levels and extreme weather. Finally, agriculture will be disrupted as a result of extreme heat, droughts, disease, and heavy downpours.

The extent of climate change in the future will depend heavily on the emissions from human activity from this point forward. However, some scientists believe it is too late to combat global warming and that we should instead focus on dealing with the consequences. Meanwhile, many non-scientists are completely skeptical that global warming exists at all and believe that the changing climate is simply a natural occurrence or a fictitious scenario created for political purposes. Both subjects will be discussed in the next 2 installments of The Effects of Climate Change.

Next in the Series: 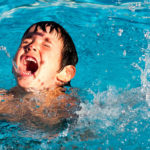 The Threat of Secondary Drowning