Abraham Lincoln spoke about the dreams he had regarding being assassinated. He received numerous death threat letters prior to and during his presidency, and was shot at twice after being inaugurated, both times luckily only taking out his tall hat. With all of this, he still resisted any attempts to protect his life. He walked about openly in public and attended events, like the one at Ford’s Theatre in Washington, DC on the fateful night of April 15, 1865, during a performance of Our American Cousin.

In that theater, John Wilkes Booth’s .44-caliber bullet crashed through the back of President Lincoln’s skull at close range, and fractured both orbital plates of the frontal bone, pushed fragments of bone into the brain, and caused his eye sockets to become engorged with blood.

Since the time of his assassination, there has been much speculation about his death and the medical treatment he received. Some have speculated that he died as a result of incompetent medical care; others wonder if President Lincoln would have survived with today’s medical technology.

Plain and simple, President Lincoln died because in 1865, trauma treatment was in its infancy, and this type of wound was mortal. A wound like the one he suffered could still be fatal today even with all of our medical advances. The first doctor to reach the president was Dr. Charles A Leale, just 23 years old and 6 weeks out of school (he was an assistant surgeon). Dr. Leale performed a cursory examination and ordered that brandy and water be brought to the president. His prognosis was that Abraham Lincoln would not recover. He wrote, “I commenced to examine his head (as no wound near the shoulder was found) and soon passed my fingers over a large firm clot of blood situated about one inch below the superior curved line of the occipital bone. The coagula I easily removed and passed the little finger of my left hand through the perfectly smooth opening made by the ball.”

Another doctor who cared for the president was 30-year-old Dr. Charles Taft. They worked to prevent the blood from accumulating within the skull cavity and compressing the brain. Customary medical practice at that time involved probing the wound to prevent the accumulation. These doctors did not have the advanced knowledge, ability, or tools to save President Lincoln’s life, and it wasn’t a reflection on their own capabilities, but of what was known at that time and the standards of care. For these doctors, it was a losing battle, and at 7:20AM on April 16, 1865, President Lincoln drew his last breath.

Advances in trauma care have progressed by leaps and bounds, and arguably, today there is the possibility that these modern advances could have altered the outcome for President Lincoln. We all look to the miraculous recovery of Gabrielle Giffords and the wonderful feat accomplished by the team of physicians who cared for her. However, it really is hard to determine if President Lincoln would have survived, and if he had survived, how he would have fared. Dr. Thomas Scalea of the University of Maryland’s Trauma Center has indicated that there was a good chance that with today’s care, President Lincoln would have lived. Dr. Scalea further stated that if the president had lived, he probably would have retained his cognitive abilities because the fatal shot did not damage the frontal lobes of the brain. Others imagine that he would have had trouble focusing, and probably would have dealt with dysflexia and vision problems. No doubt, our country’s history would have been very different if Lincoln had not died that day.

As for his assassin, after a failed kidnapping attempt of the president in March 1865, Booth decided to take his evil plan one step further. An actor by trade, he became politically involved and joined a conspiracy to take down the president, vice president, and secretary of state, to further the cause of the Confederacy. Booth shot the president at close range, then heaved himself onto the theater’s stage and yelled “Sic semper tyrannis! The South is avenged!” He broke his leg in the process but successfully got away from the theater with the help of co-conspirators. Booth traveled across the Potomac and hid in the barn of Richard C. Garret in Port Royal, Virginia. A manhunt by Union soldiers ensued and when they caught up with Booth, they shot him but he still refused to surrender. They then set the barn on fire and Booth became badly burned, crawled out, and died. 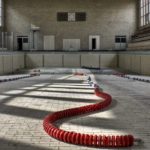