Fast cars and family cars have never integrated very well in the past. Occasionally, a car would come along and strive for a perfect marriage of these 2 automotive classes. However, until recently, no car has come close because of the technical and practical restraints inherent to these disparate classes. Now with the use of modern technology, these 2 very different classes can merge and some very special cars can be created.

BMW has always made fast and great-handling cars; this was true when they first released the M3 coupe in 1985. Regarded as one of the greatest cars ever made, BMW limited their customer base by only offering the M3 in coupe form. However, later on in 1985, BMW released their new M5 performance sedan. While that car was fast, the current M5 clearly outperforms its older counterpart. The M5 is based on the 5 Series sedan, but aside from the size, the M5 shares nothing with its lesser counterparts. The engine, transmission, suspension, and basically everything else in the car have been replaced with something better and more powerful. However, despite these upgrades, the M5 remains quiet and comfortable enough to take on long trips with the family, with a trunk big enough to store a large amount of cargo. The M5 almost has a Jekyll & Hyde personality. It can be driven very easily and for long periods of time; however, when provoked, the M5 can easily rip the doors off any competitor and can tear up any track with such ferocity that no one would see you coming.

Audi is another German brand known for their fast sedans. The S6 is a car that keeps that axiom alive. While the S6 isn’t a direct competitor with the M5, the RS6 is. Sadly, Audi refuses to sell the RS6 in the United States. The S6 can keep up with the M5, but only barely: 0-to-60 times are very similar, with only a 0.2-second difference, but quarter-mile times are drastically different due to the M5 having an extra 132 horsepower. However, what the Audi lacks in performance, it makes up for in ride quality and storage space. With more headroom and a bigger trunk, the Audi is even better than the M5 on long trips with the family. The all-wheel-drive system allows the S6 to be driven almost anywhere and in just about any weather safely. When the weather is warm, the all-wheel-drive system allows the S6 to explode out of corners with superior grip compared to the rear-wheel-drive M5. However, the S6 doesn’t have the M5’s Jekyll & Hyde personality; the S6 is always comfortable and always fast, whether on the track or in traffic.

A list of the “baddest” family sedans needs to include at least one wagon. Yes, I know that technically a wagon isn’t classified as a sedan; however, it has 4 doors and can fit 5 people, so for the sake of the argument, we’ll make a little exception. Despite the CTS-V being offered as a coupe, sedan, or wagon, I chose to include the wagon on this list because not only is it extremely fast but it has a massive cargo area, thanks to the hatch and raised roof out back. The best part about the wagon is that it retains all of the performance of the sedan but gains more practicality and cargo room. The CTS-V is also the fastest and the most powerful car on this list. Its closest competitor is the M5; however, the M5 costs $25,000 more than the CTS-V. With the money saved, you can upgrade the existing performance of the CTS-V or even buy another smaller car for your kids. Regardless of what you do with the money, you still get a brutally fast and luxurious car. When not driven hard, it rides like a Cadillac: smooth over bumps, with easy steering for navigating parking lots and a quiet ride. While the standard transmission is a 6-speed manual, the CTS-V can be ordered with a 6-speed automatic transmission for even easier driving without the loss of performance or practicality. This most certainly isn’t your grandpa’s Cadillac.

The Dodge Charger has come a very long way since its introduction in 1968. Back then, it was a 2-door muscle car marketed by promoting seats with enough room for the kids. The modern-day Charger, however, has 4 doors and is a proper sedan with room for 5 people. The Charger SRT8 is the all-out performance version of the Charger. With these upgrades, the Charger moves closer to its original muscle car roots. However, the SRT8 can handle and dance around corners, unlike its past self, which pitched and leaned violently on anything that wasn’t perfectly straight. With SRT standing for “street and racing technology,” Dodge purposely built this car for the person who wants a muscle car but has a family. With that being said, the Charger SRT8 is big and comfortable enough to make everyone happy when they are in the car. However, turning off the traction control button, this beast can lay down massively long burnouts and do many other hooligan-type things like muscle cars of the past. The Charger SRT8 isn’t the most civilized car on the list, but some may argue that it is the most fun. It’s also the cheapest.

Notable mentions (cars that have been announced but aren’t for sale yet): 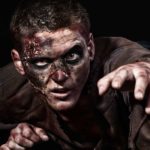 Zombies: Can It Happen?