September 11, 2001 started out as a typical day for most, but the events that began to unfold at 7:59 am changed US history forever. Thousands of innocent women, men, and children lost their lives that day at the hands of terrorists through a series of horrific attacks using passenger planes intended to crash into the Twin Towers at the World Trade Center (WTC) and the Pentagon in Washington. Since that time, rebuilding has commenced with the intention of honoring and remembering the tragic losses and in recognition of those who endured and gratefully survived.

The original WTC complex included 16 acres of property in lower Manhattan that was built between 1966 and 1987. There were 7 buildings, a plaza, a transportation hub, and an underground shopping mall. The focal point of the WTC was the Twin Towers, which stood tall against the sky. Within the towers there were many businesses, an observation deck, and restaurants, including the popular Windows on the World. The entire complex was destroyed by the terrorist attack. It became Ground Zero.

The 9/11 Memorial opened on the 10th anniversary of the attacks. It consists of 2 reflecting pools set in the footprints of the original Twin Towers. Names are inscribed in bronze parapets around the pool ledges. In the spring of 2014, the 9/11 Memorial Museum opened to the public. The mission statement of the 9/11 Memorial declares that “the lives remembered, the deeds recognized, and the spirit reawakened be eternal beacons, which reaffirm respect for life, strengthen our resolve to preserve freedom, and inspire an end to hatred, ignorance, and intolerance.”

The museum does a wonderful job of preserving the story of 9/11. It embodies its commitment as an educational and historical institution that examines 9/11 and its global significance. Chronicled are the events of the day (including background information) and the national and international response that followed. The exhibition honors the lives of the almost 3000 victims. A visit to the museum includes passage down some 70 feet through rooms that pay tribute by allowing loved ones to share the victims’ life stories. Photographs line the walls and the massacre becomes personified. There is a collection of artifacts and objects that were found among the debris, like subway passes and New York Yankees tickets. Photographs taken on 9/11 that memorialize the day hang on the walls, as well as collections of images of heartfelt support from around the world. After you descend through the exhibit halls, you enter a special section that takes you back in time. No photography is allowed beyond this point. After you pass through the revolving door, television and news broadcasts that took place on September 11, 2001 are displayed on monitors. The news coverage details the shock and fear as the day’s events unfolded, and then the sorrow that followed. You become immersed in what the world was seeing and feeling in 2001. The museum is quiet and tears are shed here. This is a place to be regarded with great respect, for it is sacred due to the tragic loss of the victims, and the courage of its survivors, first responders, and the many others who risked their lives on that fateful day.

The Freedom Tower now stands at its full 1776 feet, and the new observation deck is anticipated to open in 2015. The master rebuilding plan will continue and persevere, much like the human spirit. The building construction and transportation obstacles have been taken in stride, as locals and tourists alike look forward to the innovative complex that will allow future generations to learn and understand what took place at this site. Museums are often destinations that are overlooked on to-do lists. However, the 9/11 Memorial is a place well worth visiting. 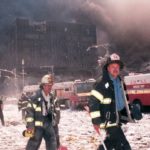