Ah, Twitter. Between politics, pandemic misinformation and sports trash-talk, it’s easy to forget that for millions of users, the social media platform is all about laughs–or at least, a smile. And that’s especially true for the thousands of medical providers who are trying to make healthcare funnier, 280 characters at a time.

Sure, plenty of docs are out there tweeting for righteous public health. And these information warriors, like @choo_ek, @wendysueswanson, @DrJenGunter or @ZDoggMD, are often very funny themselves, which is why their clever zingers get so many re-tweets.

But we’ve reached a point in 2020 where it’s worth thinking about Twitter solely as a place to find a joke, a meme or a barb that simply helps bust up a long day.

“Twitter is just a little way to break out of the routine,” says Fred Wu, a cardiologist who cares for adolescents and adults with congenital heart disease at Boston Children’s and Brigham and Women’s Hospital. “Back in the day, you might have gone into the doctors’ lounge or had lunch with a colleague and gotten a laugh. Now, we’re all so busy–but at least we’ve got Twitter.”

Part of the fun is that many–although by no means all–are anonymous, choosing not to use their real identities on social platforms. They can shake off the stuffy side of professionalism. Some swear—a lot—and call out stupidity. But in between the sharp edges of delicious snark and sarcasm, there’s also plenty of goofy good-heartedness.

No. 1 on many medics’ to follow list is Dr. Glaucomflecken, the hilarious alter-ego of an Oregon ophthalmologist, who is also an occasional stand-up comic. He’s prone to sharing predicaments. “I had to do a heart and lung exam in pre-op today and I put the stethoscope in the ears over my bouffant cap and somehow the earpieces went through the bouffant,” he tweeted recently. “So when I tried to take off the stethoscope it pulled the bouffant down over my face and the CRNA had to help me.”

Dr. Shadowgazer, a self-deprecating radiologist, also has a large following. He’s given to captivating comparisons of images of Taylor Swift, set next to look-alike medical images. And he’s fond of the charmingly obvious (“Scalpels are sharp”) and a steady defense of his Crocs.

Wu, who is also the chief engagement officer for the International Society for Adult Congenital Heart Disease, is a fan of the popular Omnintensivist, who tweets as @GoodishIntent. She’s a medical/pediatric critical care doctor, and her profile proclaims her fearlessness: “I raised 3 teenage boys, so you don’t scare me.” Plenty of her tweets focus on the quirky (and adorable) insights of her young patients and her own children, but she’s got a lot to say about coworkers, too: “My PICU partner threw away my special caffeinated soda because he ‘forgot’ I was sitting next to him in the physician’s workroom. I did what any normal person would do, I made him put his wife on the phone so she could be mad at him too.”

Another pediatrician, @DocAroundThClok@DocAroundThClok, has plenty of fans who love his dad jokes. But his all-too-precise career calculations get shared often, too: “Medicine is 20% hard work, 30% compassion for others, and 50% convincing yourself the patient’s test results which are slightly outside the normal range are probably fine.”

Anesthesiologists are an active specialty. There’s @DrJCoftheDC, an anesthesia resident who likes to posts videos of himself dancing in scrubs. And @DrSandman11, who doesn’t mind making coworkers nervous: “Sometimes I stand up just to freak the surgeons out a little.”

The best part about Twitter stars is that they’re not stingy. Twitter says that while most of its 145 million active daily users in the U.S. don’t post at all, the top 10 percent of users create 80 percent of tweets.

Plenty of Twitter docs like to muse on the weirdness of the platform itself. “I’ve experimented a lot with Twitter outrage,” tweets @MedicalAxioms, an academic hospitalist. “`Never’ is a week. `Forever’ is 2 weeks.

Although he takes his Twitter in small doses, reading a few while waiting for the elevator or on quick breaks, Wu says he spends as much as 60 to 90 minutes a day on the platform. Those witty social-media colleagues keep his work in perspective.

“They’re very funny people,” he says. “They put a little joy in my day.” 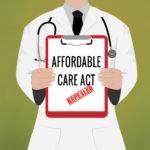 Repealing the Affordable Care Act Could Hurt Physicians and Hospitals