Last year was “brutal, exhilarating, terrifying, awesome, and ultimately grueling” for Jonathan Golob, assistant professor of infectious disease at the University of Michigan. Around Easter, he volunteered to be part of a team handling surge capacity for the hospital’s respiratory intensive care cases, as doctors were still learning how to care for patients and effectively protect themselves. “At the absolute peak, I was covering five different intensive care units filled to the brim with critically ill COVID-19 patients,” he says. “It was a lot of death and suffering. I never fully came home from that.”

The new year has only just begun. After the strain of 2020, physicians are entering 2021 with a record number of hospitalizations in the U.S. but also with new tools. In December, healthcare workers began receiving the emergency-use authorized SARS-CoV-2 vaccine from Pfizer; a week later, Moderna’s vaccine also began making its way into the deltoid muscle of frontline health professionals. Ideally, the vaccine will help relieve pressure from the overtaxed healthcare sector; in practice, reports are already arriving that some 20% to 40% of healthcare workers in Los Angeles County have refused vaccination, and logistical mismanagement has slowed distribution to a crawl.

So how are physicians feeling as they enter the new year? “Guardedly optimistic,” says Golob.

Nandita S. Mani, an infectious diseases physician and the associate medical director for infection prevention and control at the University of Washington Medical Center, says that dealing with an illness for which there was no blueprint was extraordinarily challenging. “The human toll over the last year has been devastating, and on top of that the fear and exhaustion of healthcare workers is ongoing.”

But she’s also hopeful about the coming year. “I’m dreaming of hosting friends for dinner, traveling to see my family on the East Coast, meeting my 9-month-old niece, and giving out big hugs,” Mani says. “These would be small dreams in any other year, but they feel like huge dreams to me now.” Those hopes lean heavily on the distribution and uptake of vaccines. “Widespread vaccination is really our only exit strategy, and I’m hopeful that we’ll get there in 2021,” she says.

Some physicians were making career-shifting decisions before the pandemic arrived. Omolara Uwemedimo was one of them. Uwemedimo is a pediatrician and chief executive officer of Strong Children Wellness, a network of primary care practices integrated into community-based organizations serving children and families in New York City. She launched the business after being hospitalized in 2019 with a newly diagnosed chronic illness. Around the same time, she turned her focus toward coaching      to improve retention and inclusion of women of color in medicine and academia. A year of pandemic made it clear how necessary her services were. “I wasn’t aware of how much it would be needed during a time where physicians were pushed to the brink,” she says.

The story of Susan Moore, a physician who said her symptoms were dismissed by a white doctor before she passed away from COVID-19 complications, recently ignited national conversation around medical racism, a topic Uwemedimo speaks about regularly. In 2018, a study of 702 Black male patients found that patients were more likely to agree to health screenings if their doctor was Black. But while 13% of the population is Black, just 4% of doctors are, according to The New York Times. Until recently, Uwemedimo also worked for a hospital in addition to her coaching and primary care network projects. But the pandemic gave her an additional push to jump into her businesses with both feet, and New Year’s Eve 2020 was her last day working for her hospital employer. “I’m glad that I was able to shift into this prior to the pandemic.”

Golob, too, had career plans for 2020: to primarily work in a lab focused on gut microbiome research, while spending just a couple of months of the year directly taking care of patients. “The pandemic hit right as I was attempting to launch my laboratory. It may end up an insurmountable challenge. Tempered with all this is the sense of an opportunity I’ve worked my entire life for slipping past,” he says. “In some ways, this is the least of concerns — but a way I can relate to a lot of people whose careers have been affected by the pandemic.”

“I am worn out,” Golob says. He’s parenting a toddler with his partner in the middle of this pandemic, too. He’s worried politics will get in the way of public safety measures like mask wearing and social distancing, and he has upcoming clinical services that he’s bracing for. But there’s gratitude, too. “I am endlessly grateful to the many, many, many people who have volunteered in COVID-19 trials,” he says. “The vaccines took compassion, teamwork, international cooperation, selflessness — a whole set of human attributes that really change how I think history will think of 2020.” 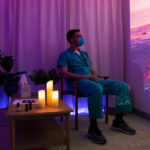