This column usually deals with real-life doctors who broke their oaths, committed despicable crimes, and almost always ended up in prison to pay for their transgressions. But in honor of author Mary Shelley’s birthday (August 30, 1797), whose most famous novel, Frankenstein, has been turned into many major motion pictures, we’d like to take a quick look at some of the most dangerous doctors in the history of film.

Perhaps because physicians hold so much power over patients, portrayals of how that power can corrupt have been a popular theme in cinema. Pushing the outer limits and exploring beyond the boundaries of medicine also seems to permeate these movies, which show doctors inserting more than a touch of madness into their medical aspirations. Keep in mind that these doctors are not necessarily inherently evil. Often, it’s their reckless medical experiments that have gone bad to wreak havoc on the world.

So let’s explore a few of these fictional doctors gone wild.

One of the most iconic horror films of all time, Frankenstein features an obsessed scientist, Dr. Heinrich Frankenstein, who’s hell-bent on assembling a living human being from body parts of exhumed corpses. His mad experiment is a success; he creates a living being but it turns out the man he reanimated can’t cope with or function properly in the real world. The man-monster winds up killing Dr. Frankenstein’s hunchbacked assistant, his former medical professor, and a little girl. The monster manages to bring misfortune to a nearby town and create hysteria among the townsfolk. Blame it on the doctor.

Dr. Henry Jekyll is a kindly English doctor in Victorian London who is certain that within every man lurks impulses for both good and evil. In order to explore the evil side of man, Dr. Jekyll concocts a potion that turns him from a mild-mannered scientist into a homicidal maniac, which he names Mr. Hyde. Along with his bad behavior, when he’s under the influence of his evil elixir, Mr. Hyde’s appearance changes into a menacing, animalistic, and primitive-looking beast. Mr. Hyde has no conscience and winds up violently killing all those close to Dr. Jekyll before he’s gunned down by the police. The film Dr. Jekyll and Mr. Hyde popularized the disparaging phrase “He’s a Jekyll and Hyde.” Blame it on the doctor.

Dr. No, the first James Bond film, featured an evil doctor as its antagonist. Britain’s top spy, Agent 007, is assigned to find a missing colleague connected to attempts to disrupt the American space program. This task takes Bond to Jamaica, where he confronts the devilish Dr. No, a high-ranking member of SPECTRE (SPecial Executive for Counter-intelligence, Terrorism, Revenge, and Extortion). The doctor is plotting to disrupt the Project Mercury space launch at Cape Canaveral with his atomic-powered energy beam. It’s a terrorist attack against the United States. Blame it on the doctor.

The Silence of the Lambs spotlights Dr. Hannibal Lecter, a highly intelligent psychiatrist and cannibalistic serial killer incarcerated at a state hospital for the criminally insane. Rookie FBI agent Clarice Starling is assigned to help find a woman who’s in the clutches of a psychopathic serial killer who skins his victims. Her superiors believe that if she talks to Dr. Lecter, she can convince him to help her solve the crimes with his brilliant criminal mind. At the end of the movie, Dr. Lecter escapes from his cell, killing a couple of prison guards in the process. He then flaunts his escape by calling Clarice and telling her that he’s “having an old friend for dinner.” Blame it on the doctor.

The movie’s tagline says it all: “The doctor is in…sane.” It’s a slasher film about the son of a murderous doctor who grows up to murder people in his town to avenge his MD dad’s death. An investigation of Dr. Evan Rendell, whose patients were mysteriously disappearing, uncovers the fact that the doctor and his son, Evan Rendell Jr, whose nickname is “Dr. Giggles” because he has a hideous laugh, were ripping out the hearts of their patients in an attempt to bring back the doctor’s dead wife. The townspeople stone Dr. Rendell to death, but Evan Jr manages to get away. Fast forward 35 years. Evan Jr has escaped an insane asylum and heads back to his town to go on a murderous rampage, killing his victims with a variety of bizarre methods loosely based on medical treatments. His victims include high school kids (including 2 teens who were in the midst of having sex), the antagonist’s father and his girlfriend, a policeman, a little girl at a carnival, and several other town residents. Dr. Giggles is all about medical mayhem. Blame it on the doctor’s son.

H.G. Wells’ novel, The Island of Dr. Moreau, has been adapted into major motion pictures numerous times. The version we’ll talk about stars Marlon Brando and Val Kilmer. Once again, a doctor with a grandiose medical vision goes a little too far. On a remote island in the South Pacific, the balance of nature has been upset by the experiments of Dr. Moreau. It seems the doctor is combining the DNA of animals and humans to create new superior beings. The experiments don’t work; the animal-humans rebel and wind up killing Dr. Moreau. What? A doctor dying as a result of his own bizarre medical experiment? I guess he only has himself to blame.

These are just some of the most deviously frightful doctors in film. Tell us your favorite movie about your favorite evil doctor. We’d love to hear from you. 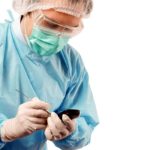