Dermatologist Richard Sharpe turned out to be a sharp-shooter, ending his wife Karen’s life with a rifle shot, a bull’s eye—sinking lead deep into her chest. It is difficult to think that a member of the Harvard Medical School faculty and highly successful entrepreneur with several lucrative side businesses could cause such devastation.

Dr. Sharpe seemed to have it all: a wife, 3 children, a big house, and lots of money. He was a multimillionaire, a result of his shrewd investments in the stock market, but his wealth actually led to his downfall. When his marriage soured, he couldn’t live with the thought of giving up $3 million in a divorce settlement to his wife, even though they had started out as high school sweethearts and had been married for 26 years. In July 2000, facing the fear of a steep financial loss, Sharpe took matters into his own hand, fired a .22-caliber rifle, and sunk a bullet into his wife’s chest in the foyer of their Wenham, MA mansion, in front of her brother!

The killing not only led to Sharpe’s arrest and conviction, but his murder trial exposed the fact that he was a compulsive cross-dresser for many years, with a perverted penchant for wearing his own daughter’s underwear. The case drew national attention when photos of Sharpe wearing fishnet stockings and skin-tight dresses were released to the public. Affidavits from Karen Sharpe’s divorce proceedings were admitted as evidence, which claimed that the doctor had been stealing her birth control pills in order to enlarge his breasts. Other testimony revealed that Sharpe had been digesting hormones to supplement his wife’s birth control pills in order to grow bigger breasts.

Sharpe’s clothes-swapping, breast-enlarging secrets were revealed to build a case for his defense. Sharpe testified that at a young age, he began cross-dressing as a defense mechanism to cope with his violent, rage-fueled, and abusive father. Several defense witnesses, including his children, also testified that Sharpe grew up in fear of his abusive father.

His defense attorney called in an expert witness, a psychiatrist who testified that Sharpe suffered from multiple disorders, including bouts of depression, as a result of his abusive paternal upbringing. The defense psychiatrist introduced the fact that as a result of the abuse, Sharpe also suffered from an intermittent explosive disorder, occasionally causing Sharpe to exhibit bursts of rage and aggression, a condition that escalated during his use of alcohol. This defense strategy was employed to prove that Sharpe, as he said on the witness stand, couldn’t recall most of what happened on the night he murdered his wife.

The flimsy defense didn’t hold water. The prosecution successfully argued that Sharpe’s symptoms of mental illness were bogus and that he had methodically planned to take his wife’s life after she filed for divorce. The jury determined the killing was not the result of an uncontrollable outburst of a mentally disturbed mind. He was convicted in 2001 of slaying his wife and was sentenced to life in prison.

In 2002, Sharpe attempted to commit suicide in his prison cell by hanging himself. The attempt was unsuccessful. However, in 2009, Sharpe’s second attempt at suicide was successful. He was found hanged to death in his prison cell, swinging from bed sheets that were rigged up as a noose, tied to the top of his bunk. He was 54.

Michael Traft, Richard Sharpe’s appellate lawyer, reflected, "Whenever a person takes their own life, obviously you feel badly for that person, but my true sympathy is with Karen Sharpe. She died needlessly." 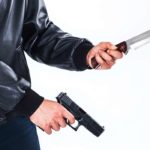