A bespectacled, unassuming man who stood only 5’ 3” tall, Hawley Harvey Crippen fulfilled his childhood interest in medicine by graduating from the University of Michigan School of Homeopathic Medicine in 1884, and then securing an MD from Cleveland’s Homeopathic Hospital.

After medical school, he moved to New York and got a job with a homeopathic pharmaceutical company run by a Dr. Munyon. Shortly afterward, he met and wed Charlotte Bell, a nurse, and the couple had a son, Otto. In 1892, Charlotte died suddenly of apoplexy (a former medical term for a stroke). Crippen couldn’t handle the stress of raising his son alone, so he persuaded his parents, who lived in California, to take total responsibility for the upbringing of his 2-year-old son.

After dropping off his son, Crippen returned to New York and soon met a 19-year-old aspiring performer and music hall singer named Cora Turner, whose birth name was Kunigunde Mackamotzki, and whose stage name was Belle Elmore. Cora was constantly taking acting and vocal lessons to advance her theatrical pursuits. She had left home when she was only 16 years old to pursue a career in show business. It was later discovered that Cora, who was very attractive and flamboyant, used her sexual charms any way she could to advance her career. She hungered for fame and money. Cora was impressed that Crippen was an MD and latched onto him, believing that his profession would bring him wealth. The couple married in 1894. With Hawley Crippen’s low-key, mild-mannered nature and Cora’s larger-than-life show biz personality, it was a mismatch from the start. As a polite, docile husband, he contrasted with Cora’s brash, promiscuous, and bullying, limelight-seeking lifestyle.

Hawley Crippen excelled at his position at Dr.Munyon’s Homeopathic Remedies company, but the money he was making, and the couple’s standard of living, was disappointing to Cora. To make matters worse, a nationwide economic depression closed many theaters, and the little work there had been for Cora dried up. What’s more, because money was tight, Crippen could no longer afford to fund her perpetual singing and acting lessons.

However, at Dr. Munyon’s Homeopathic Remedies, Crippen’s work ethic resulted in promotions and a higher salary; by 1895, he was promoted to general manager of the Philadelphia area, and the couple took up residence in that city. Then, in 1897, Crippen was assigned to open his company’s first overseas office in London, and he was now making enough money to continue Cora’s acting and singing lessons. But when he moved to England, Cora initially remained in Philadelphia to continue to pursue her show business career. By all accounts, her talents were thin at best.

Eventually, Cora moved to London to join her husband, but the two began to drift further and further apart. Cora was obsessed with making it big in show biz and Crippen tried his best to placate her when her career wasn’t advancing the way she wished it would. All the while, Cora was continuing to socialize, drink, and party with her show biz friends, as well as openly carouse and have extramarital affairs with numerous men. But even after hearing rumors to that effect, Crippen chose to ignore the situation and did not confront his wife about her sexual encounters. Perhaps his wife’s cheating ways were the reason that Crippen decided to get involved in managing Cora’s stage career, trying desperately to make her a success. However, he spent so much of his time in this pursuit that in 1899 he got fired from his job due to his suffering work.

Their Marriage Bottoms Out

Crippen managed to earn some money in the pharmaceutical and homeopathic mail order business, but the income was meager and, once again, Cora’s singing and acting lessons had to come to a halt. The Crippens were financially forced to move from a fashionable and prestigious Piccadilly residency to a poor section of London, which caused even more tension in their marriage. In 1901, Crippen was employed at a homeopathic clinic when he met an 18-year-old secretary, Ethel LeNeve. By 1903, the two were extremely close, spending more and more time together as romance blossomed. However, Crippen’s strict Protestant upbringing discouraged him from having sexual relations with Ethel.

By now, Cora and Hawley were living 2 separate lives. He was in love and in a time-consuming, although platonic, relationship with Ethel, and she was carrying on with her theater friends and multiple lovers. Cora also became deeply involved with the Music Hall Ladies’ Guild, eventually becoming the organization’s treasurer. She felt her new position would further her show biz dreams.

In 1905, the Crippens once again moved, this time to a residence in a better section of London. In order to sustain her highly social and partying lifestyle, Cora convinced her husband to take in borders to help supplement his income. During this time, they fought and argued constantly. A year later, inevitably, Crippen came home early from work one day to find Cora in bed with a young lodger. He had had enough, and although they remained living under the same roof, their marriage was permanently splintered. Crippen immediately sought solace with Ethel, consummating and cementing his relationship with her. Crippen left the homeopathic business and entered the field of dentistry; Ethel worked alongside him in his new practice.

Cora’s friends at the Music Hall Ladies’ Guild spotted Crippen and Ethel dining together and speculated that her husband was having an intimate affair. Quite hypocritically, Cora immediately approached her husband and threatened to ruin his professional reputation by going public with his affair. On the evening of January 31, 1910, the Crippens entertained guests. The next morning, Cora was nowhere to be found; she had mysteriously disappeared into thin air.

When Cora’s concerned friends from the Music Guild asked Crippen about his wife’s whereabouts, he told them that she had returned to the US. It seems that her friends were not satisfied with his explanation and, after a constant barrage of queries, Crippen changed his story, claiming that Cora had died in California and that her body had been cremated, which aroused even further suspicion from Cora’s circle of friends. Meanwhile, Ethel moved into Crippen’s house. Even though they were told that Ethel was Crippen’s niece, this move made Cora’s friends even more suspicious, so they began their own investigation, discovering that there was no record of a ship sailing to the US on the day Cora was supposed to have set to sea. And the cremation story rang hollow because as a Catholic, Cora would not have wanted to be cremated.

Armed with their information, Cora’s friends got Scotland Yard involved; the case was assigned to Chief Inspector Walter Dew, who notably was the first officer on the scene at Jack the Ripper’s fifth and final victim, Mary Jane Kelly. Crippen’s house was searched but nothing out of the ordinary was found. Inspector Dew questioned Crippen at his dental practice about Cora’s whereabouts. Crippen calmly confessed that he made up the story about his wife’s death, because in reality, he told the inspector, Cora was engaged in an extramarital affair and had run off with her lover. He said that he concocted the story as a way to save face in the community and avoid the inevitable scandal and humiliation. Dew was completely satisfied with the explanation but he never relayed that information to Crippen.

After Inspector Dew left, Crippen panicked and told Ethel they would need to leave England for about a year until Cora’s murder investigation cooled down. The two traveled to Antwerp and boarded a ship, the SS Montrose, bound for Quebec. But Crippen decided it would be best if the two traveled incognito. He traveled as Mr. John Robinson, and he disguised Ethel, rather poorly, as his young son, John Robinson Jr.

Meanwhile, on a routine follow-up visit to Crippen’s dental practice, Inspector Dew discovered that Crippen, and his secretary Ethel, had vanished. Another search of Crippen’s house was ordered, and this time, rotting remains, which included abdominal scar tissue, were found beneath the cellar floor. After analysis, the presence of hyoscine hydrobromide was detected in the remains. It was soon discovered that Hawley Crippen had recently purchased 5 grains of the drug from a chemist who supplied medication to Crippen’s dentistry practice. And the belly scar was consistent with an operation noted in Cora’s medical history.

An arrest warrant was issued for Hawley Crippen and Ethel LeNeve. The manhunt made for huge headlines in England; the story and photographs of the 2 fugitives were in all the European newspapers. Unfortunately for Crippen and Ethel, the skipper of the SS Montrose, Captain Henry George Kendal, was keeping up with the news and instantly recognized Crippen and Ethel in her obvious disguise. The captain sent a telegraph to British authorities. Inspector Dew boarded a faster liner, the SS Laurentic, and arrived in Quebec ahead of Crippen. Dew boarded the SS Montrose and approached Crippen with the greeting: “Good morning, Dr. Crippen. Do you know me? I’m Chief Inspector Dew from Scotland Yard.” Crippen held out his wrists to be handcuffed, replying: “Thank God it’s over. The suspense has been too great. I couldn’t stand it any longer.” The 2 fugitives were arrested.

Crippen and Ethel were tried separately in a London courtroom. It took a jury only 27 minutes to find Crippen guilty of murder. He was sentenced to death by hanging and he met his fate on November 23, 1910. Ethel was acquitted after only 17 minutes of deliberation after her defense painted her as an innocent, scared young girl who was manipulated by Crippen and forced to follow his orders. Hawley Crippen had become infamous for being the first criminal in the world to be apprehended with the aid of wireless communication.

Did He Really Do It?

Because of the wide notoriety of the Crippen case, many people, including journalists as well as forensic scientists, have investigated the crime over the years and some are convinced of Crippen’s innocence. Here are just some of the specifics of the case that raise doubts about the doctor’s guilt:

Regardless, a court appeal to hear a case to pardon Crippen posthumously was denied in December 2009. 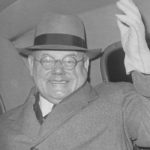