Tongue splitting involves cutting the tongue centrally from the tip to as far back as the base. This divides the tongues to resemble the forked tongue of a snake and is sometimes referred to as “forking the tongue.” This used to be rare but today is common among body modification aficionados and is one of the newest trends.

The procedure should be performed by a board-certified plastic or oral surgeon to minimize complications. Costs range from $1000 to $2500. There are multiple methods available to fork the tongue, but to prevent healing from occurring at the back of the cut, which could result in the split not being as far back as desired, a piercing should be inserted at the beginning of the fork.

Once the tongue is numbed, a surgeon uses a scalpel to cut the tongue in half and, once cut, each raw edge is sutured to prevent the cut sides from healing back together.

To prevent excessive bleeding, a scalpel can be heated to cauterize the cut, or an argon laser can be used for cauterizing.

The procedure is often carried out by body piercers or by do-it-yourselfers at home. One method is the tie-off, or fishing line, procedure. To accomplish this, fishing line is threaded through an existing tongue piercing, tied to the tip of the tongue, and continually tightened as the line cuts through the tongue tissue. This process minimizes bleeding and stiches aren’t required, as the tongue heals as it is being split. Forking the tongue with this method can take anywhere from a few days to several months.

Dustin Allor, a 19-year-old body piercer, developed the fishing line procedure when she split her own tongue in 1996. Dustin inspired Natalie Lowry to use the same method to split her tongue in 2001. Erik Sprague, aka The Lizardman, had his tongue split in 1997 by oral surgeon Dr. Lawrence Busino, which was the first splitting done with an argon laser.

With practice, people can gain control over the individual sides of their bifurcated tongue. The two sides can be raised up and down opposite one another or spread apart separately to grasp an object. Splitting the tongue makes speaking more difficult for some people.

In some parts of the country, tongue splitting is illegal. Illinois banned it in 2003. Since then, New York, Delaware, and Texas have passed laws banning it. The US military explicitly bans tongue splitting.

Interestingly, tongue splitting is easier to reverse than tattoos. 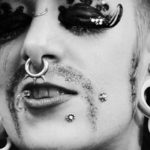