Lip and eyelid sewing are on the list of extreme forms of body modification. They’re a type of cosmetic procedure that is certainly not meant to improve one’s looks. Sometimes referred to as “play piercing,” this bizarre practice falls under the category of ritualistic body modification because it is typically connected to personal symbolism for individuals who undergo this painful process to make a point, for example, as an act of protest. This body ritual may also be incorporated into a public performance at a body mod conference, or one may feel the need for assistance in focusing their mind when meditating; lips sewn together can effectively remove the temptation to speak.

The procedure typically utilizes sutures to stitch the lips together or the eyes shut. However, needle blades and cannulas have also been used, with monofilament (fishing line) threaded through the tiny hollow tubes. Sutures are typically left in place anywhere from several minutes to a few hours. Obviously, the sutures should not be tied too tightly because of the large amount of swelling that occurs as a result of the procedure. The holes heal quickly once the sutures are removed and scarring rarely results.

Lip Sewing as a Form of Peaceful (Although Painful) Protest

People who participate in lip and eyelid sewing frequently make a public spectacle of it in order to bring attention to a political cause. For example, in 2002, at Australia’s largest camp for illegal immigrants seeking asylum, 58 detainees sewed their lips together to protest delays in processing their visa applications. In 2012, in protest of German and Bavarian asylum policies, 2 asylum seekers sewed their lips together. And when the 2014 Olympics were nearing, a German drag queen named Barbie Breakout protested Russia’s anti-gay legislation and the country’s violence against lesbian, gay, bisexual, and transgender individuals and produced a video titled Open Your Mouth. The video contains a shocking and bloody account of Barbie Breakout painfully sewing her own lips together. “It was about symbolism, not self-harm,” she said, noting that the pain of “what is happening in Russia was greater than the physical pain of the needle.”

But Wait: There Are Valid Medical Reasons to Have One’s Eyes Sewn Shut

When a patient’s natural tearing and blinking mechanisms are impaired, the eye (especially the cornea) can become dry and keratinization of the corneal epithelium can occur. In such cases, the eyelids can be sewn together in order to protect the eye until the underlying condition can be corrected. The medical procedure for suturing the eyes shut entirely or partially is known as tarsorrhaphy, which is performed under local anesthesia. Sutures are placed at the corners of the eyelid in order to narrow the palpebral fissures. The result is an improvement in lubrication and less air exposure, which can dry the eye.

There are many conditions that could require a tarsorrhaphy, including:

“The sewing ritual helped me come to terms with the fact that events in my life are not always within my control, and that sometimes I am subject to the uncontrollable forces of the world. After understanding and accepting my own lack of control—and that it’s okay—I realized my ability to overcome my own fears and physical pain by focusing my mind and its thoughts. Intense concentration on my mental processes, I learned, endows me with an ability through which my mental conceptions and ideas are manifested outside my mind and into the physical world—my fear and pain are not real, expressing and personifying these thoughts only hold me back. Through mental concentration I may conquer any limitations and constraints that I create and perpetuate in my life.”

Those are the medical reasons for having eyelids sewn shut. However, some people who do not have a medical reason undergo lip and/or eyelid sewing for purely aesthetic or philosophical purposes. Here is a quote from someone who underwent both eye and lip sewing; it may help put into perspective why one would experience such an endeavor. 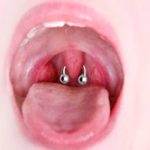